‘There’s not much of a buzz’: Royal wedding from a London pub

‘Poor girl. If I was Harry I’d drive her straight to Heathrow and take her away from the whole lot of them’ 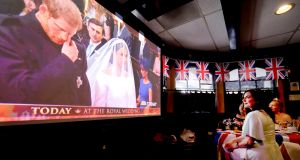 The bunting was out, with images of Harry and Meghan running across the top of the bar and union jacks standing in flower pots beneath the big screen televisions, but half an hour before the wedding was to begin, nobody had turned up. In the days before the wedding, newspapers warned that street parties and other events could be filled to overflowing because so few had applied for permits from local councils. In Hull, there was not a single application and there was little stirring in the capital either.

“I think it’s because it’s not in London, there’s not much of a buzz about it,” the barman said.

As the guests took their places in St George’s Chapel in Windsor, more guests made their way into the pub too, starting with a cadaverous young man with crude tattoos running up his arms and the black rings of a dirty hangover circling his eyes. He was followed by an old gentleman with an ancient cocker spaniel and soon afterwards, two middle aged men in t-shirts, shorts and dark glasses who ordered a bottle of white wine.

A mysterious trio sat around a table on the terrace outside, led by a sour-faced old skinhead with a Fred Perry shirt and a dodgy hip who sat between a young Roseanne Barr and a blonde Morticia Addams. Was one his wife and the other his daughter? Both his daughters? Or both his wives?

Near them sat a large, red-faced gentleman with a newspaper opened at the racing page, which he studied closely throughout the ceremony, making careful marks with a pencil.

The hungover cadaver was the first to speak, nodding towards the screen as Prince Harry waited for his bride to arrive.

“Poor fucker. He can say goodnight to his nights out now,” he said.

The barman chipped in that, having tried marriage once, he was never going there again but our small congregation was soon silenced by the sight of Meghan Markle walking up the aisle to Handel’s “Eternal Source of Light Divine”. We kept a respectful silence for the first few minutes, apart from the odd comment about how the older royals were looking, with opinion divided about Prince Philip.

“He’s 97 next month, how do you expect him to look?” said the man with the cocker spaniel.

When the Archbishop of Canterbury asked if anyone knew any reason why Harry and Meghan should not marry, the man with the paper shouted “Yes, I want her” and gave a phlegmy little cackle. By now, the pair in shorts were on their second bottle of wine, Roseanne had bellied up to the bar for another round and we were all settling in nicely.

When Bishop Michael Curry began his address, we all initially switched off just as we would for any sermon but a few lines in, heads began to turn upwards.

I looked across at the cadaver, who had tears in his eyes, the pathos evoked by the bishop’s rhetoric, perhaps quickened by the onset of post-alcoholic depression.

“He speaks very well,” said the man with the cocker spaniel.

If the bishop had stopped there, he would have held the admiration of the pub but as he went on and on, the screens began to show the royal family’s reaction, with Camilla starting to giggle beneath her huge pink hat. Zara Philips looked as if she had swallowed a tennis ball and the Princesses Beatrice and Eugenie seemed to think it was the greatest lark ever. Elton John, not strictly speaking a member of the royal family, appeared to have just eaten a plateful of sick.

The pub started getting restless too, with Roseanne the first to voice a protest.

“He’s taking the fucking piss now,” she said as she went back up to the bar, and the skinhead grunted in agreement while Morticia rolled her eyes.

The mood lightened again when the bishop wound up and the choir sang Stand by Me and by the time Harry and Meghan emerged from the chapel to the cheering crowd outside, the pub was full of loyal cheer. The two men in shorts, now halfway through the third bottle, were discussing the low key public response to the wedding and the older of the two thought he had the answer.

“It’s not a front row wedding because Harry’s too far back in the succession. They gave him a secondary wedding, not in Westminster Abbey or anything, and that’s appropriate,” he said, managing to sound po-faced and shit-faced at the same time.

Roseanne and Morticia had already moved on from the wedding and were backbiting about a mutual friend and the man with the cocker spaniel started to move off. But the melancholic cadaver was still staring at the screen as Meghan smiled and waved.

“If I was Harry I’d drive her straight to Heathrow and take her away from the whole fucking lot of them.”