Like an ageing Rio drag queen, a Brexiteer MP goes through the motions

London Letter: Tory supporter of Brexit lapses into weary rehearsal of its benefits 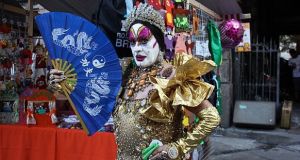 The faintest throb of trance music softened the hush inside the shop, bare save for rows of small, plain bottles lined up on the shelves like in a medical dispensary.

A thin young man in a blue, fisherman’s smock with a beard straight from the court of Ferdinand and Isabella was on his knees arranging a window display involving a cactus, a bottle and some sand.

“Can I help you find anything at all?” he said without looking up.

I told him I didn’t know what I wanted but that his computer would because it was whatever scent I bought last time I was there. A young woman popped up from behind a counter, silently tapped my name in, found what I was looking for and handed it to the young man.

“Abstraction Raisonnée – how interesting,” he said, his eyes narrowing. “It feels so familiar and yet it’s extremely cheeky. Don’t you think?”

As he described how the twist of rhubarb disrupted the calm of the vetiver, which in turn contrasted with a beguiling mix of nutmeg and tobacco, creating a paradox of austerity and licentiousness, I realised that we could talk all day, not least because there was no sign of any other customers to interrupt us.

On every other block in this well-heeled corner of London, another shop is boarded up, its window advertising “an exciting retail opportunity” for anyone who wants to rent it. In a clothes shop on Sloane Square, a sales assistant listed for me all the standard enemies of retail, starting with the internet and ending with the weather.

“And of course there’s the Russians,” he said, glancing over his shoulder.

Many of the wealthy Russians who live around Belgravia and Chelsea have gone to ground since the latest financial sanctions from Washington made the cost of doing business with some top oligarchs insupportable. Now that we were established as confidential friends, the sales assistant leant across the counter and revealed another suspect for the decline in sales: Brexit.

“We didn’t understand what we were doing, they didn’t explain it. Now the City’s going to get hit and interest rates will go up. And the Europeans want to punish us for leaving, don’t they?”

Spending on British high streets fell last month at its fastest annual rate in six years, down 5.4 per cent compared with April last year, and almost one in 10 shops lay empty.

On the other hand, figures released this week showed that more people in Britain are in work than at any time since records began and wages are starting to outpace inflation.

“Brexit Britain is booming! Remain doom-mongers talk down the UK’s economy . . . yet a record number of Britons are now in work and more foreigners have jobs than before the referendum,” trumpeted the Daily Mail.  A few hours after touring the ruins of high-end retail, I ran into a moderate Brexiteer Conservative MP at a party and asked him how he thought everything was going.  “Everyone is just so bored,” he said, drawing out the vowel into a yawn.

After an amusing display of disloyalty and a ritual warning about the folly of Ireland’s approach to the negotiations, however, he lapsed into a weary rehearsal of the promise of life outside the European Union and the wisdom of Theresa May’s approach.

As I watched him go through the motions on Brexit, as so many of his colleagues on the Tory backbenches do every day, I recalled a moment last Friday night, when I found myself in a seedy nightclub in a sketchy district of Rio de Janeiro.

A fat drag queen was flanked by two skinny ones, dressed as majorettes in satin tunics and tall plumed shakos, gripping plump, crimson pompoms. The portly star and the majorette on the left were all vigour and enthusiasm as they stepped, stretched, shook and shimmied.

But the figure on the right, a lugubrious senior citizen with a five o’clock shadow, could scarcely lift a leg, gazing ahead with an expression somewhere between determination and despair as she gave the pompoms an occasional, limp, desultory jerk.