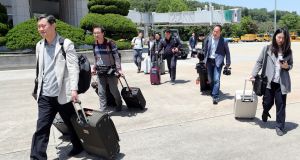 South Korean journalists head to an aircraft at Seoul Airport on Wednesday from where they were to fly to North Korea to witness the dismantlement of the North’s key nuclear test site. Photograph: EPA

North Korea has accepted a list of South Korean reporters to visit their nuclear testing site after a days-long tug of war with Seoul, South Korea’s unification ministry said on Wednesday.

North Korea invited a handful of media from a number of countries to witness the dismantling of the Punggye-ri testing site to uphold its pledge to discontinue nuclear tests. However, it had declined to take the South Korea reporters after calling off planned inter-Korean talks in protest against US-South Korean air combat drills.

The invitation to witness the dismantling of the Punggye-ri site was seen as an indication that North Korea’s unexpected offer to end its nuclear tests still held despite renewed diplomatic uncertainty.

Reporters from news outlets from the other countries arrived in the North Korean port city of Wonsan on Tuesday, where they are waiting to be guided to the testing site for the event, set for between Wednesday and Friday.

However, South Korean journalists returned home overnight after failing to obtain a visa from Pyongyang in Beijing.

The unification ministry welcomed Pyongyang’s decision to accept the eight South Korean reporters on Wednesday, saying they would fly direct to Wonsan at 3.30am GMT (4.30am Irish time) from an air base south of Seoul using a government transport plane.

“We hope for an early realisation of complete denuclearisation of the Korean peninsula through a North Korea-US summit and dialogue of various levels, starting with the abolition of the nuclear test site,” ministry spokesman Baik Tae-hyun told a news briefing.

Invited members of foreign media said North Korean authorities initially told them the weather was too bad for travel, but they may depart later on Wednesday for Punggye-ri, more than 200 km from Wonsan.

An aircraft carrying the South Korean journalists landed in Wonsan at around 6am GMT, a CNN correspondent said on Twitter.

North Korea’s last-minute acceptance of South Korean reporters came amid concerns that leader Kim Jong-un was starting to back away from his promise to scrap the nuclear programme.

The North has threatened to pull out of an unprecedented summit between Mr Kim and US president Donald Trump in Singapore on June 12th if Washington demands Pyongyang unilaterally abandon its nuclear arsenal. It has also criticised joint air combat drills between the United States and South Korea.

Mr Trump said on Tuesday there was a “substantial chance” the summit would not take place.

Seoul is seeking to mediate between the United States and North Korea, with President Moon Jae-in visiting Washington on Tuesday to urge Mr Trump to seize a rare opportunity to meet Mr Kim.

A senior South Korean official told reporters on condition of anonymity: “Given the North’s thinking and statements alike, we would be able to turn around the mood after the Max Thunder drills from the current standoff and restart dialogue.” – Reuters