Iran threatens ‘strong punch to the mouth’ for Mike Pompeo 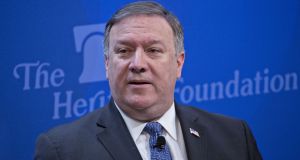 Mike Pompeo, US secretary of state, set out a long list of demands on Iran in a speech on Monday at the Heritage Foundation in Washington, D.C. Photograph: Andrew Harrer/Bloomberg.

A senior Iranian military commander poured scorn on US threats to tighten sanctions on Tuesday, saying the Islamic Republic’s people would respond by punching US secretary of state Mike Pompeo in the mouth.

Mr Pompeo on Monday demanded Iran make sweeping changes that would effectively force it to reverse the recent spread of its military and political influence through the Middle East to the shores of the Mediterranean Sea.

He demanded that Iran drop its nuclear and ballistic missile programmes, grant nuclear inspectors greater access and pull out of the Syrian civil war or else face sanctions as the Trump administration hardened its approach to Tehran.

“The people of Iran should stand united in the face of this and they will deliver a strong punch to the mouth of the American secretary of state and anyone who backs them,” Ismail Kowsari, the deputy commander of the Sarollah Revolutionary Guards base in Tehran said, according to the Iranian Labour News Agency (ILNA).

Limiting Iran’s missile capabilities was one of the main aims highlighted by Mr Pompeo.

“Who are you and America to tell us to limit the range of ballistic missiles?” Mr Kowsari said, according to ILNA.

“History has shown that with the attacks on Hiroshima and Nagasaki America is the top criminal with regard to missiles,” he added.

Qassem Soleimani, the head of the branch of the Revolutionary Guards that carries out operations outside Iran’s borders, was singled out by Mr Pompeo as a top troublemaker in the Middle East.

Mr Kowsari said that the Iranian people back Soleimani. “Soleimani is not a single person. The great people of Iran support him.”

“Iran rejects the allegations and lies in this so-called new strategy and condemns the US secretary of state’s ... open interference in its internal affairs and the unlawful threats against a United Nations member state,” state TV quoted a foreign ministry statement as saying.

German foreign minister Heiko Maas said he would travel to Washington to meet Mr Pompeo to discuss Washington’s stance on the international nuclear deal with Iran.

“From here I will actually travel to Washington to have a meeting with Secretary Pompeo, and take advantage of that meeting to talk about this,” Mr Maas said in response to a question from a journalist about the Iran deal. He was speaking to reporters in Buenos Aires at the end of a G20 meeting in the Argentine capital. - Reuters