Wedding fever grips America as one of their own marries royalty

America may have won its independence, but it’s still in thrall to the British monarchy 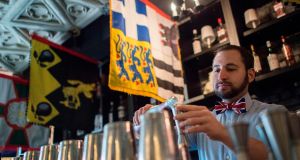 The elderflower cakes are for sale in Georgetown’s famous cupcake store; a royal pop-up bar has opened in the trendy Shaw neighbourhood in DC; and the British embassy is throwing the party of all parties on Saturday night.

Royal wedding fever has well and truly hit this week as America prepares for the nuptials of Prince Harry and Meghan Markle.

More than 200 years after the fledging American nation threw off the yoke of British imperialism by tossing hundreds of chests of tea into Boston Harbour, the British monarchy still exerts a fascination for many Americans.

While the Irish may like to boast about the annual St “Patty’s” Day celebrations, America’s love affair with the Windsors comes a close second.

It is expected that viewing figures will top the 23 million who tuned in to watch the marriage of Prince William and Kate Middleton in 2011. NBC, CNN and other networks will broadcast live from Windsor, with coverage starting at 4am on the east coast; PBS, America’s public channel, has already run a special Royal Wedding Watch programme all week at 5.30pm.

“The real question is, will Meghan wear a tiara?” the breathless presenter asked the row of three British “experts” who have been sitting on the couch daily providing the American public with the latest updates on the preparations. “The Queen wears a tiara better than anyone in the world, of course,” was the cut-glass reply from the incredibly well-groomed royal watcher.

The wedding has a particular relevance for Americans as one of their own prepares to marry into the British royal family.

36-year-old Markle – though almost better known to European fans than Americans through her role in Suits – is California-born.

She’s not the first American to marry British royalty. Famously, Wallis Simpson, an American divorcee, triggered the abdication crisis of 1936. Ultimately Edward VIII chose to abdicate rather than surrender Mrs Simpson, and the two married the following year in France. Edward’s brother George acceded, paving the way for his daughter Elizabeth, on his death in 1952, to assume the throne – where she remains ever since.

Virginia Woolf, who was far from a royalist, captured the fever of the time in her diary as the abdication crisis gripped the British nation, pushing all talk of the looming war from the papers.

“They say Royalty is in peril. The Empire is divided. In fact, never has there been such a crisis. That I think is true. Spain, Germany, Russia – all are elbowed out. The marriage stretches from one end of the paper to another,” she wrote.

On the eve of the abdication, Woolf conveyed the mood in London. “All London was gay & garrulous – not exactly gay, but excited. We can’t have a woman Simpson for Queen, that was the sense of it. She’s no more royal than me or you, was what the grocer’s young woman said.”

Markle raised eyebrows by wearing a £56,000 Ralph and Russo dress for her official engagement shoot

More than 80 years later, similar sentiments are in the air once more as the sixth in line to the throne prepares to marry an American divorcee.

This week the class and racial dynamics underpinning the Meghan-Harry wedding burst into the open as the controversy over Thomas Markle’s attendance at his daughter’s wedding dominated the news agenda.

Markle, the daughter of an African-American woman and a Caucasian American, is in many ways the American dream – a talented individual, who made it as an actor through hard work.

How she will adapt to royal life remains to be seen. A feisty, well-spoken feminist, she may follow the route of Kate Middleton, who has managed to utter not one word of controversy since becoming Duchess of Cambridge.

New to the arcane rules of etiquette that characterise the upper echelons of the British establishment, Markle raised eyebrows by wearing a £56,000 Ralph and Russo dress for her official engagement shoot with Prince Harry (Kate wore a £159 dress for hers) – fulfilling all stereotypes about American brashness.

The British press’s fixation on her background has bemused American readers. As the opening line of a front page New York Times article this week put it, sniffily: “It is notoriously hard to escape your background in Britain, no matter how successful you are or how much your life has diverged from that of your relatives.”

As the run-up to the wedding between Meghan Markle and Prince Harry has shown, in many ways the differences that prompted America to declare independence from Britain– the desire for a democratic, meritocratic Republic – still exist.

The American public may indulge in Downton Abbey and The Crown like the best of them, but give them a meritocracy any day.