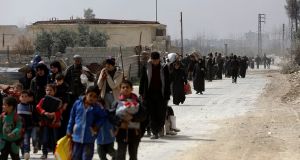 Syrians from rebel-held Eastern Ghouta arrive at a government-held checkpoint in Adra after escaping the enclave through a corridor opened by government forces on Thursday. Photograph: Louai Beshara/AFP/Getty Images

Thousands of Syrian civilians fled from a rebel pocket in eastern Ghouta on Thursday, crossing by foot to army positions in the first mass exodus from the besieged enclave since Syrian government forces launched an assault to capture it a month ago.

Men, women and children staggered under the weight of blankets, bags and suitcases as they walked along a dirt road to army lines on the outskirts of Hammouriyeh town. Some wept. One man carried a baby in a suitcase, the child’s head and arms peaking out through the zipper. Others reached government positions in the nearby town of Beit Sawa on wheelchairs.

“We had been trapped in the basements and did not dare come out, in the cellars and tunnels,” a man who left the rebel pocket to government territory told Reuters on the outskirts of Hammouriyeh. “We could not do anything . . . There was no food.”

“There was no water, no electricity, no education for the children,” said another man from Hammouriyeh, Amer al-Shourbaji. Another man, who gave his name as Abu al-Nour, said he had been in contact with people in army territory for days trying to arrange safe passage out. “For eight days, we have co-ordinated with the soldiers, telling them we want to get the civilians out,” he said.

The exodus could prove a key moment in eastern Ghouta, one of the seven-year-old war’s biggest battles, in which the fate of civilians trapped in the siege zone has been central. The United Nations has estimated 400,000 people had been under siege in eastern Ghouta, the last large rebel bastion near the capital Damascus, with little access to food or medicine.

The government and its Russian allies have been pounding the area with air strikes since mid-February and launched a ground assault that has seized much of the territory since last week, cutting towns off from each other. Fighting has raged on there despite a UN Security Council demand for a ceasefire.

Moscow and Damascus argue the enemies they target are members of terrorist groups unprotected by the truce. They say rebels are preventing civilians from escaping. The rebels deny this and say most residents are now fleeing because of the government’s bombs falling on Ghouta.

The UK-based Syrian Observatory for Human Rights, which monitors the conflict, said at least 12,500 people left towards government territory. They came out of Hammouriyeh and Jisreen, which the army advanced into on Thursday, and other towns nearby.

“Every hour, over 800 people are leaving,” Russia’s RIA news agency cited Maj Gen Vladimir Zolotukhin as saying. Moscow has offered safe passage out to rebel fighters willing to surrender the territory, a tactic that has helped Damascus and its allies regain control over major cities in western Syria. The opposition says that amounts to forced displacement.

Last week, pro-government forces splintered the rebel territory of eastern Ghouta into three separate pockets. Rebel fighters, who have vowed not to surrender, have been pulling out of some towns in the face of the advance. “We have withdrawn to Ain Terma,” Mahmoud (23), a fighter with the Failaq al-Rahman rebel faction in Hammouriyeh said by telephone, referring to another nearby town.

“The situation is very mixed up. we didn’t understand anything at all,” he said. “We don’t want anything other than for the civilians to be safe, and whatever happens to us happens. We don’t know what will happen.”

The Syrian army seized swathes of farmland and factories in the northeast of Hammouriyeh, said a military media unit run by Iran-backed Hizbullah, which fights alongside Syria’s army. Wael Olwan, spokesman for Failaq al-Rahman, accused the army in a tweet of storming Hammouriyeh and exploiting the plight of civilians fleeing air strikes.

Earlier this week, small groups of sick and wounded people were evacuated from another zone further north, around the town of Douma, under a deal between the Jaish al-Islam rebel faction and Russia. There has so far been no mass exodus from there.

The International Committee of the Red Cross (ICRC) said 25 aid trucks entered that besieged pocket and headed to Douma, eastern Ghouta’s biggest town. “This is just a little of what these families need,” the ICRC in Syria said in a tweet. ICRC spokeswoman Iolanda Jaquemet said the convoy, which entered through the al-Wafideen crossing with the United Nations, contained food aid for 26,100 people for one month, among other items.

The observatory said government warplanes and shelling had pounded the Failaq zone overnight. Air strikes on the town of Zamalka there killed 12 people on Thursday, it said. The Douma town appeared quiet on Thursday while the aid convoy entered.

The army’s month-long onslaught of air and artillery strikes on eastern Ghouta has killed more than 1,100 people and injured thousands more, the United Nations says. – Reuters