Millions cast votes in first round of Indian general elections 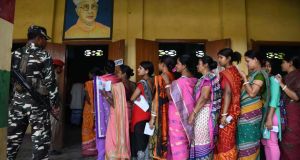 Indian voters stand in queue to cast their votes at a polling station as security personnel stand guard during India’s general election in Amoni village, in northeastern state of Assam on April 11th. Photograph: Biju Boro/AFP/Getty

Millions of Indians voted on Thursday in the first of seven rounds of polling in the country’s general elections, in which prime minister Narendra Modi’s Hindu nationalist Bharatiya Janata Party (BJP) is seeking a second five-year term.

Voters trekked long distances, rode bicycles or hitched rides on jam-packed tractors to tens of thousands of polling stations in 91 parliamentary constituencies spread over 20 states and federally administered regions, to cast their ballot.

“This is the only time we can do something and when the game is truly in our hands,” she said.

Election commission officials, responsible for conducting India’s provincial and federal elections, said turnout was high in Thursday’s polls, in which 142 million people were eligible to vote.

The highest voter turnout of 70 per cent was in eastern Bengal state, where the BJP is on a collision course with Mamta Banerjee, a firebrand regional politician who heads the Trinamool Congress Party.

The remaining six rounds of polling in what observers have billed as India’s most important election in decades will end on May 19th and involve some 760 million voters, more than twice the US population. Results for all 543 parliamentary seats will be announced four days later.

Mr Modi (68) and the BJP remain the frontrunners in opinion polls, despite concerns over record unemployment and declining farm incomes in rural areas, where nearly two-thirds of over 1.3 billion Indians live.

But the promise of “vikas”, or development, in the run up to the 2014 elections had led to the BJP winning 282 seats, the largest mandate won by a single party after three decades of successive coalition governments.

However, with few achievements to speak of on the campaign trail five years later, Mr Modi has diverted attention from the economy by asserting the BJPs monopoly over nationalism and patriotism.

This election is really seen as Modi versus the rest

He successfully made both these notions the leitmotif for the elections in his tireless campaigning across India.

In acrimonious and hostile electioneering, Mr Modi has repeatedly accused his rivals, particularly the main opposition Congress Party, of being “anti-national” and “Pakistan loyalists” – a pejorative dig at India’s neighbouring nuclear rival with whom it has had a hostile relationship ever since independence in 1947.

Pollsters claim support for the BJP spiked following Mr Modi’s recent ordering of an aerial strike inside Pakistan at an Islamist group’s seminary, after it claimed responsibility for killing 40 Indian paramilitary soldiers in disputed Kashmir state.

“If you’re with Modi you are with India,” declared BJP candidate Tejasvi Surya, who is contesting the election in India’s hi-tech capital, Bangalore.

Gilles Verniers, a political science professor at Ashoka University on Delhi’s outskirts, said the Congress Party, led by Rahul Gandhi, the 48-year old scion of the Nehru-Gandhi political dynasty, would struggle to defeat the BJP. “The gap between the Congress and the BJP is enormous, ” he told Reuters.

After winning merely 44 seats in parliament in 2014, Congress is trying hard to rebuild itself by promising an annual hand out of €960 to India’s poorest, but its offer lacks financial credibility.

The BJP has crafted a presidential style campaign around Mr Modi and one that the opposition has been unable to counter by focusing on his government’s economic and administrative failures.

“This election is really seen as Modi versus the rest,” said political commentator Sagarika Ghose.