Compromise extension is worst of both worlds 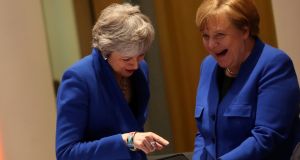 Britain’s prime minister Theresa May and Germany’s chancellor Angela Merkel: Brexiteers rail against Mrs May for accepting the extension but they also scent weakness on the EU side. Photograph: Kenzo Tribouillard

As European Union leaders debated the length of the Brexit extension to offer Theresa May in Brussels late on Wednesday night, they heard persuasive arguments on both sides. Advocates of a long extension of up to a year, led by Angela Merkel, argued that Britain’s political system needed time to find a way through the Brexit deadlock, perhaps with a general election or a second referendum.

But Emmanuel Macron warned that anything more than a short extension would encourage Britain to believe that the EU was unwilling to countenance a no-deal Brexit and would do almost anything to avoid it. By splitting the difference and offering a six-month extension, the leaders have produced the worst of both worlds, as Thursday’s debate in the House of Commons showed.

Brexiteers railed against the prime minister for accepting the extension but they also scented weakness on the EU side, which the DUP’s Nigel Dodds said had blinked in the face of a threat of a no-deal Brexit.

“Until yesterday, the EU was saying very clearly that unless there was a credible plan for an election or a referendum, or a prospect of getting the withdrawal agreement through soon, it would not grant an extension, and that if it did, there would be stringent conditions. In fact, it held to neither of those statements. When it was faced with the unpalatable choice of a no-deal, it backed down,” he said.

Advocates of a second referendum celebrated the six-month delay, which they claimed was long enough to allow the government put the question to the people again. And although the prime minister and Jeremy Corbyn met on Thursday afternoon, few at Westminster hold out much hope that the current talks between the government and Labour will produce a common approach to Brexit.

The prime minister said she would seek to ratify the Brexit deal and pass the necessary implementation legislation in time for Britain to avoid contesting European Parliament elections on May 23rd.

But neither May nor Corbyn command enough authority over their MPs to guarantee that a deal they both endorsed would win a majority in the House of Commons. For now, neither the hard Brexiteers on the Conservative benches nor the ardent advocates of a second referendum on the benches opposite see any incentive to soften their positions. And the six-month extension agreed in Brussels will do nothing to change that.