Theresa May has played down the importance of the length of the article 50 extension European Union leaders offer Britain at a summit in Brussels on Wednesday evening. Video: European Council 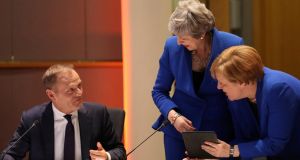 Britain’s prime minister Theresa May and Germany’s chancellor Angela Merkel in discussion with European Council president Donald Tusk, ahead of the meeting at the European Parliament in Brussels, Belgium. Photograph: Kenzo Tribouillard/Pool via Reuters

EU leaders on Wednesday night offered British prime minister Theresa May a further extension to the article 50 Brexit process, moving the date for the UK’s exit forward from Friday to October 31st.

The debate on the duration of the extension went on late into the night, with most countries favouring a longer extension, according to sources briefed on the talks. The French president Emmanuel Macron held out, and leaders eventually agreed on the October 31st date after a marathon negotiating session which concluded after 1am.

While the UK will not now leave the EU on Friday evening, some leaders remained unconvinced that a no-deal departure is ruled out in the medium term. Others hope the extension allows time for the UK to ratify the Withdrawal Agreement and potentially commit to a customs union with the EU. Under the agreement reached on Wednesday, progress will be reviewed by EU leaders in June.

The UK prime minister appeared before leaders of the 27 remaining EU states early Wednesday evening to make substantially the case she had made in her letter to European Council president Donald Tusk last week.

She insisted any extension would have to allow the UK to leave as soon as agreement was reached in the House of Commons on withdrawal. Speaking earlier to Tory MPs, she said her own departure would not happen until then.

“What is important is that any extension enables us to leave at the point at which we ratify a withdrawal agreement,” she told journalists, making clear that she was not wedded to her proposed June 30th departure date.

Mrs May hopes to finalise a deal before European elections on May 23rd, allowing her to cancel them in the UK. Leaders were adamant that, if the UK is still a member after that date and has not participated in the elections, the UK will leave the union with a no-deal on June 1st. Mrs May insisted to sceptical leaders that talks with the Labour Party were going “very well”.

In a bid to encourage those discussions, Taoiseach Leo Varadkar floated the idea of a new customs union involving the EU and the UK, which would give the UK a say in new trade deals – interpreted as an attempt to get around the objection that the UK would have no say in decision-making if it stayed in the existing EU customs union.

EU27 has agreed an extension of Art. 50. I will now meet PM @theresa_may for the UK government's agreement. #Brexit

Mrs May, responding to concerns – particularly from the French that the UK could be disruptive to EU decision-making if it remained a member for long – reiterated assurances that the UK would act in a spirit of “sincere co-operation”.

The French were looking for stronger assurances of “good behaviour”, specifically a promise not to wield vetoes in the ongoing multiannual budget discussions and appointments to top jobs. But others were confident vetoes could be circumvented if used, a position reiterated in the draft conclusions, which stressed the right of the 27 to meet together as 27.

The debate on the duration of the extension, which took place over the leaders’ working dinner, favoured closure in December 2019. Mr Macron, however, strongly urged an October date and held out.

Ms Foster described Mrs May’s approach to Brexit as “weak” and damaging to the UK. She made the comments ahead of her meeting with EU chief Brexit negotiator Michel Barnier on Thursday.

“This is a useful opportunity to once again set out why we oppose the withdrawal agreement and urge the EU’s chief negotiator to acknowledge the concerns of those we represent in Northern Ireland by making the changes outlined by parliament on January 29th.

The DUP adamantly oppose the backstop insurance policy for the Northern Ireland border, which they believe would redraw the border with the EU down the Irish Sea.

Ms Foster added: “The European Union has spoken much about protecting the peace process and the Belfast Agreement but has consistently ignored the views of unionists who do not want a new border erected between Northern Ireland the rest of the UK.

“Despite the prime minister being warned about the opposition to her withdrawal agreement, she has limped along and tried to force people into a cul-de-sac where they have no option but to support her deal.

“That is a weak approach and demeans the strength of this great nation. It is also foolish as it traps the UK and burdens future generations with a bad deal.” – Additional reporting: Agencies