Seven-year residency in Ecuadorean embassy in London ends with arrest 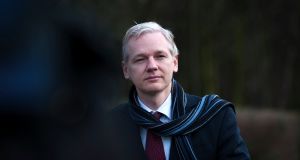 Assange is arrested in London and is later granted conditional bail after his supporters pay £240,000 (€280,000) in cash and sureties.

The UK’s supreme court rules Assange should be extradited to Sweden to face questioning over the allegations.

Assange enters the Ecuadorean embassy in London, requesting political asylum. Scotland Yard says he will be subject to arrest for breaching his bail conditions.

Ecuador grants Assange political asylum on the grounds that his human rights may be violated if he is extradited.

Swedish prosecutors drop their investigation into allegations of sexual molestation and unlawful coercion, but Assange still faces the more serious accusation of rape.

The UK’s Metropolitan Police announces it will end its 24-hour guard outside the Ecuadorean embassy, part of a three-year police operation that is estimated to have cost more than £12 million.

A UN panel rules that Assange is being “arbitrarily detained” in the Ecuadorean embassy.

WikiLeaks lawyers say Assange is going to launch legal action against the government of Ecuador, accusing it of violating his “fundamental rights and freedoms.

An inadvertent disclosure indicates US prosecutors have prepared charges against Julian Assange, the founder of WikiLeaks.

Julian Assange is arrested by UK police in London after Ecuadorean police withdrew his asylum. – Copyright The Financial Times Limited 2019