Australian Prime Minister Malcolm Turnbull said on Tuesday (June 6) police were treating a deadly siege in the southern city of Melbourne as an "act of terrorism" after a claim by the Islamic State group that one of its fighters was the gunman. 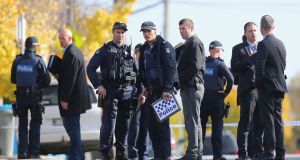 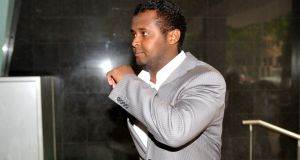 Yacqub Khayre walks from a court appearance in Melbourne, Australia in this December 23rd, 2010 Photograph: AAP via Reuters 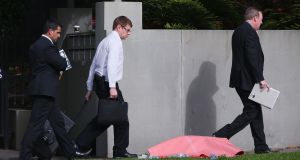 Australian prime minister Malcolm Turnbull said on Tuesday police were treating a deadly siege in the southern city of Melbourne as an “act of terrorism” after a claim by the Islamic State group that one of its fighters was the gunman responsible.

Police shot dead gunman Yacqub Khayre, who they said had a long criminal history, on Monday after he killed a man in the foyer of an apartment block in Melbourne, Australia’s second-largest city, and held a woman hostage inside.

Senior officials confirmed that Khayre had been acquitted of a plot to attack a Sydney army base in 2009 and was on parole for a violent home invasion at the time of Monday’s siege.

“This terrorist attack by a known criminal, a man who was only recently released on parole, is a shocking, cowardly crime,” Mr Turnbull told reporters in the capital, Canberra.

“It is a terrorist attack and it underlines the need for us to be constantly vigilant, never to be deterred, always defiant, in the face of Islamist terrorism,” he said.

Australian police also said they were investigating the siege as act of terrorism after Islamic State claimed responsibility for the attack via its Amaq news agency. They identified Khayre as a 29-year-old Australian of Somali heritage.

Amaq said the attack was launched because of Australia’s membership in a US-led coalition fighting against the militant Islamist group in Syria and Iraq.

Police said they were investigating whether Khayre had any established links with the group.

Victoria state police commissioner Graham Ashton said earlier Khayre had arranged to meet a female escort at a block of serviced apartments in the beachside Melbourne suburb of Brighton on Monday.

After shooting and killing a staff member when he arrived, Khayre then held the woman hostage for several hours before he burst out of the building and engaged police in a firefight, during which he was killed.

The woman was unhurt but three police officers suffered gunshot wounds that were not life-threatening, Mr Ashton said.

Mr Turnbull questioned why Khayre was not behind bars after a string of offences.

Khayre first came to the attention of Australian counter-terrorism police in 2009, when he was one of five men accused of plotting an attack on Sydney’s Holsworthy Army base to kill soldiers. Three of the men were convicted, while Khayre and the fifth man were acquitted.

The Victorian Supreme Court was told during that case that Khayre had been a worshipper at a Melbourne mosque and at a nearby prayer hall regarded by police as an “incubator” of extremist ideology.

Court documents show Khayre migrated as a child with his family to Australia through a Kenyan refugee camp. He was recognised as a refugee under Australia’s humanitarian migration programme and later became an Australian citizen, police said.

Forensic investigators were at Khayre’s family home in Melbourne’s suburban Roxborough Park, according to a Reuters witness.

Police said they were also conducting “reassurance patrols” to calm the neighbourhood.

Australia, a staunch ally of the United States, has been on heightened alert for attacks by home-grown militants returning from fighting in the Middle East, or their supporters, since 2014. Police have foiled several major plots in recent years.

In December 2014, a gunman killed one hostage during a 17-hour siege at a popular Sydney cafe.

Another hostage was killed by fragments of a bullet fired by police who stormed the cafe and killed the gunman, who was not affiliated to any militant groups and acted alone.

Six people were arrested over a plan to set off bombs in Melbourne on Christmas Day last year.

1 Independent TD Tommy Broughan announces retirement from Dáil
2 Eating out in Dublin – the homeless way
3 Irish Times poll: Large majority want change of government
4 Which jobs do teenage girls and boys aspire to have by age 30?
5 Maria Bailey announces she will not stand for re-election
Real news has value SUBSCRIBE