Terrorism is becoming normal, and that will be its undoing

Fintan O’Toole: Attacks on civil society are futile. Humans have a great capacity to just carry on

Workers around the London Bridge area talk about how they feel on their first day back in work after the weekend's events. 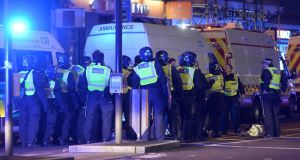 After every terrorist outrage there is a renewed commitment from political leaders to defeat terrorism. But the underlying truth is that terrorism is self-defeating. It suffers the paradox of all forms of outrage: the more of it there is, the less effective it becomes. And for much of the world, terrorism is becoming normalised: it is part of the texture of contemporary life.

This is not, of course, to diminish the horror and sorrow of events like those in London on Saturday night or to dismiss the depravity of those responsible. Nor is to say that the people and networks who carry out these crimes do not need to be fought with every effective weapon that is compatible with the continued existence of an open democracy. But these attacks on civil society are futile, because there is nothing the terrorists can do about the human capacity to just carry on.

Perhaps the single most notorious phrase to have emerged from the Northern Ireland conflict was the claim by the British home secretary Reginald Maudling in 1971 that the situation in Ulster represented “an acceptable level of violence”. Most people, quite rightly, found this language repellent, oozing a terrible smugness about suffering and death. But there was also an uncomfortable core of truth in Maudling’s claim. No level of violence is or should ever be morally or politically acceptable – but societies do learn to live with a surprisingly high level of dread.

We know this very well in Ireland. The Troubles, after the initial shock, acquired an element of the surreal. The most shocking thing for foreigners visiting, say, Belfast in the long years of conflict was not the troops and armoured vehicles on the streets or the ever-present possibility of bombs or murders. It was the normality. Mundane reality was not displaced by the violence but continued alongside it.

This condition is not quite universal now, but it is becoming a common experience. Most contemporary people live in parallel mental universes. One universe is stable and steady and familiar. The other is full of horrors. We try to keep them apart because how else can we live? And this double-mindedness is not primarily a result of terrorism. It’s just the way human existence is. We all know that terrible things can happen to us at any moment, even in the most peaceful and secure societies. Illnesses and accidents are always waiting to claim us and our loved ones. Death is always at the edge of our peripheral vision – always has been and always will be.

It’s because this is just part of the human condition that people are able to deploy it in the face of terrorist atrocities. When attacks like the London one happen, journalists and politicians reach for words like heroic and courageous to describe the determination of ordinary people to carry on with their lives. But it’s not heroic: it’s just human. We are compartmentalising creatures. If we were not, we would be so consumed by anxiety that we could not function at all.

So the terrorists are not really up against the heroism of mundane life. They are up against its very mundanity. This quality is not very nice. It involves a hell of a lot of forgetting, the deployment of a defensive force field that keeps away the knowledge of what we hear and read and see. It makes us collude with oblivion: all but those who were personally affected by Saturday night’s atrocity will have blanked out the names and faces and the mutilated bodies within months, even weeks. This is not something to be proud of, but it is the way we survive.

We need both to fight against this tendency and to embrace it. The fight against it is partly a matter of language: the dead deserve better from us than the deadening cliches that we roll out again and again – monsters, insane, cowardly, heroic, courageous. They do not deserve knee-jerk political responses that demonise suspect communities or inadvertently collude with the killers in undermining the values of an open society.

But we also have to acknowledge the plain fact of resilience. The stuff that people tend to say in the aftermath of an atrocity – that London, Manchester, Madrid, Paris, Brussels or New York will never be the same again – is well meant. But it’s not true. And saying it only feeds the narcissistic delusions of the terrorists. It is what they want to believe, and believing it justifies in the zealot’s overheated mind the cruelties he inflicts. The truth is that places recover with shocking alacrity. Even after the megaterror of 9/11, New York quickly went back to being New York.

It’s much, much harder to terrorise a population into submission than official and unofficial purveyors of mass violence always think it is. Normality isn’t a fixed state but a spectrum with a remarkably wide range. Terrorists are contemptible for many reasons, but one of them is the stupidity of not knowing this. They try to magnify themselves with epic acts of cruelty. In the end they are diminished and defeated by the strange ability of human beings to step around the pools of blood, keep going and forget.