London attacker lived in Ireland and got married here

London's mayor led a vigil on Monday (June 5) to honour the victims of extremist attacks in the heart of the capital, in which seven people were killed and dozens needed hospital treatment, with 18 still in a critical condition. 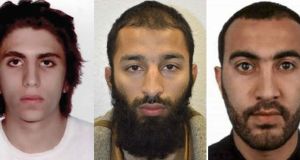 One of the attackers who killed seven people and injured 48 near London Bridge on Saturday lived for a time in Ireland, where he married his British wife.

Another of the three assailants who were shot dead by armed police during the attack was a well-known supporter of a radical Islamist group who had been monitored by police in London.

Police named two of the attackers as Khuram Butt (27), a Pakistani-born British citizen, and Rachid Redouane (30), both of whom lived in Barking, east London.

The source said Zaghba’s Italian mother lives in the northern Italian city of Bologna, confirming a report on the website of newspaper Corriere della Sera. Corriere wrote that

Zaghba was stopped at Bologna airport in 2016 when he was trying to fly to Syria and that Italian authorities had tipped off Britain about his movements.

He was born in the Moroccan city of Fez in 1995. London police said they were not naming the third attacker yet. “We are making inquiries and when we are able to confirm the name we will,” a spokesman said.

A cross-border inquiry is seeking to establish if Redouane, who lived in Rathmines for a time, got married in Ireland for immigration reasons. Police said Redouane claimed to be Moroccan or Libyan.

An investigation in recent years found some men who had been refused immigration status or whose marriage plans had been questioned in Britain sought to marry in Ireland as a “back door” to staying in the European Union.

It is understood he married in 2011 or 2012 before leaving for London and that he made an unsuccessful application for asylum in the UK in 2009.

Redouane’s wife was among those arrested in London as part of the investigation into Saturday night’s atrocity. All 12 people arrested were released without charge on Monday night. There is no suggestion of wrongdoing on her part.

Redouane was unknown to British police and An Garda Síochána. He is believed to have returned here briefly last year but because he was neither investigated nor under surveillance, the security services have yet to establish how and when he was radicalised. A photograph of Redouane and information about him, including the dates his travel records suggested he had lived in Dublin, were sent to the Garda on Sunday morning, just hours after the attack in London.

Speaking in Chicago on Monday, Taoiseach Enda Kenny said Redouane had never been under surveillance in Ireland.

“There are a small number of people in Ireland who are being monitored and observed in respect of radicalisation and matters relevant to that. In this case, these facts are being checked but my understanding is this individual was not a member of that small group.”

Mr Kenny was asked if he was concerned about the impact on the future of the Common Travel Area, which allows free movement between Ireland and Britain. He said those were “issues that obviously will be reflected upon in the days to come”.

Butt, who is believed to have been the ringleader, was known to the UK authorities as a supporter of the banned Islamist group Al-Muhajiroun.

He appeared last year in a Channel Four documentary, The Jihadis Next Door. He was shown praying with radical Muslims in Regent’s Park, in front of the black flag used by Islamic State.

Assistant commissioner Mark Rowley, Britain’s top counterterrorism officer, said on Monday Butt was known to police and MI5 but there had been no evidence an attack was being planned and he was moved to the “lower echelons” of those under investigation.

“Inquiries are ongoing to confirm the identity of their accomplice,” Mr Rowley said. “Work is ongoing to understand more about them, their connections and whether they were assisted or supported by anyone else.”