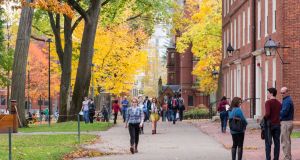 The move comes as US colleges and universities are taking an increasingly tough tone on sex assault and harassment. File photograph: Getty Images

Top US academic institution Harvard University has reversed its admission of at least 10 applicants to its incoming freshman class after learning the group traded sexually explicit and sometimes racist images in a private online message group, the student newspaper reported.

A university spokeswoman declined on Monday to comment on Sunday’s Harvard Crimson report, which cites multiple members of the incoming class, including one unnamed prospective who said his admission offer had been withdrawn.

The messages, exchanged on a private Facebook group, at times joked about sexual assault, ethnic groups and the Holocaust, and referred to child abuse as sexually arousing. One message referred to the hanging of a Mexican child as “pinata time”, the newspaper reported.

University officials notified the students in April that their admission offers had been revoked, said the Crimson.

“We do not comment publicly on the admissions status of individual applicants,” said Harvard spokeswoman Rachael Dane.

University policies allow for admission offers to be rescinded under several circumstances, including if students fail to graduate high school, are shown to have lied on their applications or take part in conduct that brings their honesty, maturity or moral character into question.

The move comes as US colleges and universities are taking an increasingly tough tone on sex assault and harassment.