Trump critical of London mayor over his response to attack 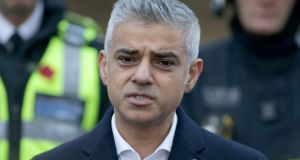 London mayor Sadiq Khan: Trump’s tweet appears to refer to comments by Mr Khan when he said that while people would see an increased police presence, there was “no reason to be alarmed”

US president Donald Trump sparked controversy in the aftermath of Saturday night’s attack as he appeared to criticise London mayor Sadiq Khan over his response to the tragedy.

Taking to twitter on Sunday morning, Mr Trump wrote: “At least 7 dead and 48 wounded in terror attack and Mayor of London says there is “no reason to be alarmed!”

The tweet was one of a trio of messages sent by Mr Trump from the White House shortly after 7am on Sunday. Mr Trump then travelled to his golf club located around 20 minutes from central Washington where he spent most of day, the second consecutive day he played golf at the Trump “National” golf club in Virginia.

Mr Trump’s tweet appeared to refer to comments by Mr Khan in a TV interview in which he said that, while people would see an increased police presence, including armed and uniformed officers, there was “no reason to be alarmed”.

A spokesman for Mr Khan said that the mayor had “more important things to do than respond to Donald Trump’s ill-informed tweet that deliberately takes out of context his remarks”.

The incident is not the first time Mr Trump’s family have clashed with London’s mayor over twitter. In March, the US president’s eldest son Donald tweeted hours after the Westminster bridge attack: “You have to be kidding me?!: Terror attacks are part of living in big city, says London Mayor Sadiq Khan.” His tweet was subsequently revealed to be a reference to comments made by Mr Khan the previous year.

The president also referenced gun control in a tweet sent shortly after “Do you notice we are not having a gun debate right now? That’s because they used knives and a truck!”

Mr Trump’s immediate reaction to news of the attack on Saturday night had already raised the ire of many when he tweeted that his proposed travel ban needed to be instated.

He also retweeted an unconfirmed report from the website Drudge Report stating that a van had mowed down 20 people.  Twenty minutes later the White House press secretary Sean Spicer tweeted that the president had been briefed by his national security team. It is not clear if Mr Trump’s tweet was sent after he had been briefed on the evolving situation in London.

Tensions between London and Washing ton are already heightened after allegations that US intelligence officials leaked sensitive information related to the Manchester attack to US media.

Elsewhere, world leaders condemned the attack and expressed solidarity with the UK.

French president Emmanuel Macron said France was “more than ever at the side of the United Kingdom” in response to “this new tragedy”.

German chancellor Angela Merkel said she learned with “sadness and dismay” of the attack. “In the fight against every form of terrorism we stand firmly and with determination at Britain’s side.”

Russian president Vladimir Putin, in a telegram to British prime minister Theresa May, said the attack was “shocking in its cruelty and cynicism”.

European Council president Donald Tusk said in a tweet: “My heart and mind are in London after another cowardly attack. Europe stands by UK in fight against terrorism.”