Trump will not block Comey’s testimony to Congress 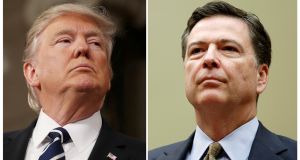 The White House said on Monday that President Donald Trump will not invoke executive privilege to try to block James Comey, the FBI director he fired, from testifying before Congress this week, clearing the way for a hearing that may be the most anticipated in Washington in months if not years.

Mr Comey is scheduled to appear before the Senate Intelligence Committee on Thursday for his first public discussion of the events that led to his dismissal last month in the midst of leading an investigation into associates of Mr Trump.

Lawmakers are especially interested in reports that Mr Trump sought to convince Mr Comey to shut down an investigation into the president’s former national security adviser. It was not clear that Mr Trump would have succeeded in stopping Mr Comey from testifying had he chosen to cite executive privilege.

The US supreme court has found that presidents enjoy a right to confidentiality in communications with their advisers but it is not an absolute privilege and courts have overriden such claims in the past. If Mr Trump had tried to assert executive privilege and the Senate committee challenged in court, legal experts said Mr Trump had a weak case because he has himself already publicly discussed his private conversations with Mr Comey.

The president fired Mr Comey on May 9th as the FBI was in the midst of looking into contacts between Russia and Mr Trump’s associates. While Mr Trump and his aides initially said he acted at the recommendation of the deputy attorney general because of the way Mr Comey handled last year’s investigation into Hillary Clinton’s emails, Mr Trump later said he had already decided to fire the FBI director regardless of any recommendations and that he had the Russia investigation in mind.

In the weeks since then, associates of Mr Comey have said the former director felt uncomfortable about efforts by Mr Trump to compromise the bureau’s traditional independence.

Just days after Mr Trump’s inauguration, he invited the director to dinner and, according to people familiar with Mr Comey’s account, asked him repeatedly for his loyalty, which Mr Comey declined to give. Mr Trump has denied that he did so, but said it would not have been wrong if he had.

A few weeks later, the day after Mr Trump pushed out Michael Flynn, his national security adviser, who had provided misleading accounts of a phone call with Russia’s ambassador, the president asked Mr Comey to drop the investigation into Mr Flynn, according to notes taken contemporaneously by Mr Comey. Mr Comey refused.

Some critics of Mr Trump have said that such a request, especially given that he later fired Mr Comey, could be interpreted as an obstruction of justice. But Republican lawmakers also plan to quiz Mr Comey about why he did not act at the time if he considered the president’s request to be improper pressure.