Q&A: Has Theresa May really cut the UK’s police numbers?

London terror attack: Prime minister under fire over decisions made as home secretary 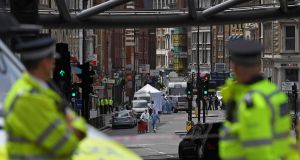 British prime minister Theresa May has come under fire for cutting police numbers while she was home secretary, with her critics contending in the wake of three recent attacks that the UK’s ability to fight terrorism has been compromised by a lack of resources.

Did police numbers fall while Theresa May was home secretary?

Yes. The number of police officers in England and Wales fell by 18,991, or 13 per cent, between September 2010 and September 2016, according to the home office.

Separate statistics show the number of authorised firearms officers fell by 19 per cent to 5,639 between March 2010 and March 2016.

Karen Bradley, culture secretary and a former home office minister, explained on Monday: “We’ve seen reductions in police officers across the board, we had to take difficult decisions in 2010 when we came into office when, as you remember, there was no money.”

Did they decide to cut police numbers because crime fell?

No, the cuts were made as part of the government’s austerity programme.

Overall police budgets were cut by more than 20 per cent between 2010 and 2015. From 2015 onwards, the overall policing budget has been protected in real terms. During the Conservatives’ time in office, funding for counter-terror policing has been ringfenced and increased in line with inflation.

But the fall in crime to a 30-year low on May’s watch did make the budget cuts easier to justify.

More recently, this has become harder to argue. An increase in knife and gun violence, particularly in London, has raised concerns that the overall drop in crime may not continue.

Also, the Office for National Statistics has only just started to include fraud and cyber crime in its headline crime numbers. The first set of crime statistics to reflect this change, published in January, brought the estimated total number of crimes to 11.8 million, up from 6.6 million the year before. This could reflect the fact that while it appeared to be falling, crime has instead been shifting from the real world into the virtual one.

Would recruiting more officers help to deal with the terror threat?

Some police chiefs think so. Cressida Dick, head of the Metropolitan Police, has repeatedly dodged the question of whether she needs more officers in the light of the London Bridge attack, citing pre-election purdah. But she did say on Monday: “I think it’s appropriate for us all to look at the amount of resource the police have, both the counter-terrorism police but also our neighbourhood officers.”

Dick’s focus on the importance of local policing reflects the concerns of other police chiefs that forces are losing access to intelligence about potentially dangerous individuals within their communities.

One former chief constable said: “The cuts mean that across the board, and especially on the front line, in community policing, the numbers have been denuded . . . these political decisions are now coming home to roost.”

Jeremy Corbyn, the Labour leader, has seized on such criticisms, and has even called on the prime minister to resign because of her role in cutting police numbers while home secretary. May hit back by denying that reduced resources were weakening the police response to terror.

“We have protected counter-terrorism policing budgets, we have also provided funding for an increase in the number of armed police officers and, since 2015, we have protected overall police budgets,” she said on Monday. She added that the response to terrorism was not just about police numbers but the powers that police have to deal with terror suspects, which she said had “increased”.

David Cameron announced funding for 1,500 more armed police officers following the terror attacks in Paris and Brussels in 2015. The problem is these officers have proved difficult to recruit and his promise is yet to fully materialise.

Since the recent spate of terror in London and Manchester, questions have been raised about whether all officers should be routinely armed. Cressida Dick has argued against the idea, saying, “I don’t think the public want to live in a place where we are all armed to the teeth.” But she did suggest that it would be useful to have a “highly trained, equipped, mobile [unit of firearms officers].”

One proposed solution is to create a national armed police force, drawing together firearms experts from the Civil Nuclear Constabulary, the Ministry of Defence Police and British Transport Police under one central command. The idea, mooted last autumn and now confirmed in the Tory manifesto, would create a 4,000-strong force to protect national infrastructure and respond rapidly to attacks.

What else are the political parties promising on police resources?

The Tory manifesto promises continued investment in counter-terrorism and cyber crime prevention. Labour says it will recruit 10,000 more police officers in community policing roles. The Liberal Democrats would give an additional £300 million a year to local forces.