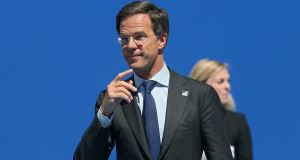 Mark Rutte, the Dutch prime minister: 83 days since the general election and no sign of a workable government yet. Photograph: EPA/Stephanie LeCocq

It’s 83 days since the Dutch general election returned prime minister Mark Rutte’s Liberals at the head of the polls, but still there’s no sign of a workable coalition government – and Geert Wilders is seeing the exclusion of his right-wing Freedom Party becoming ever less politically sustainable.

After an acrimonious election campaign, Mr Rutte watched his 2012 tally of 41 seats in the 150-seat parliament dwindle to 33, though he’d comfortably achieved what Brussels had feared might be the impossible: leaving the anti-EU leader in a distant and ignominious second place.

As so often in countries where coalitions are the norm, however, winning was the easy part. And Mr Rutte’s absolute conviction that he would not work with the Freedom Party leader because of his anti-Islam views, regardless of his 20-seat mandate, limited the governmental options even further.

In everyone’s mind as the exit polls emerged late on March 15th was the fate of the first Rutte cabinet in 2010 – a minority Liberal-Christian Democrat coalition that collapsed two years later when Mr Wilders withdrew the support he’d agreed from the opposition benches.

That’s why Mr Rutte and the other mainstream leaders made clear on the hustings that they had no appetite for being “held hostage” – as they saw it – a second time, until the far-right leader judged the circumstances right to spark another mid-term election on an issue of his own choosing.

Asked during a TV debate if he could see himself being forced by political circumstances – circumstances such as he’s now facing – to sit down and talk turkey with Mr Wilders, Mr Rutte, not a man to corner himself, replied unequivocally: “The chance is not 0.1 per cent, it is zero.”

In effect, Mr Rutte was betting the farm on his ability to form a third coalition without Mr Wilders.

So for the past two-and-a-half months, the main political parties have tried in vain to agree a coalition with a reasonable chance of running a full four-year term – without including, even in talks about talks, the electorate’s second most popular choice.

It hasn’t worked. The two most feasible options have now been ruled out. Former health minister, Edith Schippers, “sherpa” to the talks, has stepped down citing lack of progress, saying she believes the process is moving towards a Liberal-Christian Democrat-D66 minority government.

Her replacement, retired judge, Hermann Willink (75), veteran of negotiations leading to three governments, says that rather than look immediately at new options, he wants to start again – which he did last Wednesday.

On paper at least, the most promising of the options he’ll revisit was a four-party coalition of the Liberals (33 seats), Christian Democrats (19), D66 (19), and GreenLeft, who won 14 seats under charismatic young leader, Jesse Klaver. With 76 seats needed for an overall majority, that would make a safe total of 85.

The problem was that on issues such as immigration and climate change the gap between the centre-right Liberals and the Christian Democrats and the centre-left D66 and GreenLeft proved impossible to bridge.

From there the deadlock deepened. An attempt to bring the orthodox Protestant party, Christian Union, to the table with its five seats was vetoed by D66 because of its hardline on issues such as euthanasia (which is legal in the Netherlands).

An approach to the Socialists with their 14 seats was rejected by leader, Emile Roemer, who pleaded inability to work with the economically conservative Liberals.

A meeting on a centre-left alliance of the Socialists, D66 and the Christian Democrats lasted 10 minutes.

In the wings, Mr Wilders – who is now being investigated, it emerged on Friday, for anti-Islam comments he allegedly made in Austria in 2015 – is adopting a pose of sorrow rather than of anger.

Lamenting that Mr Rutte seemed willing to flirt with anyone – even the Socialists – to avoid talking to him, Mr Wilders observed: “The irony is that the Freedom Party is the only potential partner that will wholeheartedly support the Liberals’ demand for a tougher immigration policy…”

The problem for Mr Rutte is that he’s actually right.