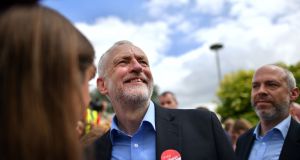 The Labour leader confirmed his decision to participate just hours before the debate, and accused the prime minister of having “difficulty meeting anybody”.

Ms May made clear early in the campaign that she would not take part in TV debates, apparently judging that she had little to gain given her commanding poll lead. She said she preferred “to get out and about and meet voters”.

Mr Corbyn initially said he too would not appear if the prime minister did not. But on Wednesday he said there was “no hiding place” in the election and that people should have “the chance to hear and engage with the leaders of the main parties before they vote”.

Following the Labour leader’s move, the Conservatives said their plans were unchanged, and that Ms May would not be “swapping soundbites with six other politicians”.

The BBC debate comes at a point of increasing uncertainty about the election result, with the Conservatives’ poll lead having fallen significantly, and one YouGov study suggesting there could be a hung parliament.

The latest FT poll of polls gives Ms May’s party a nine-point lead, down from as much as 20 points a few weeks ago. Mr Corbyn’s personal ratings have improved, and some key Labour policies, including rail nationalisation and increased NHS spending, are proving popular with voters.

In the debate, which will be shown live at 7.30pm on BBC One, the Conservatives will instead be represented by Amber Rudd, the home secretary, who performed strongly in a similar encounter as a Remain campaigner ahead of the EU referendum.

The other politicians taking part in the debate are: the Liberal Democrats’ Tim Farron, the UK Independence party’s Paul Nuttall, the Scottish National party’s Angus Robertson, Plaid Cymru’s Leanne Wood, and Caroline Lucas of the Green party. The programme lasts until 9pm, and will include opening statements and questions from the audience.

Ms May and Mr Corbyn will appear in a BBC Question Time special on Friday night at 8.30pm. They also appeared consecutively in a joint Sky News/Channel 4 event on Monday, but were not on stage at the same time.

The prime minister’s absence could undermine her campaign message that the election on June 8th is a choice between her and Mr Corbyn. However, taking part also holds risks for Mr Corbyn, who is likely to be attacked by Mr Nuttall on immigration and by Mr Farron on Brexit. Both Ukip and the Liberal Democrats have so far struggled to make progress in national polls.

In 2015, David Cameron refused to take part in head-to-head debates with Labour’s Ed Miliband, but he did appear in the seven-way BBC format.