London's mayor led a vigil on Monday (June 5) to honour the victims of extremist attacks in the heart of the capital, in which seven people were killed and dozens needed hospital treatment, with 18 still in a critical condition. 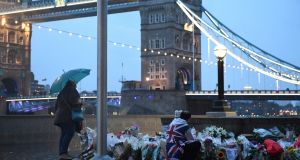 Potters Fields Park in London on Monday after a vigil to commemorate the victims of the attack on London Bridge and at Borough Market that killed seven people. Photograph: Chris J Ratcliffe/AFP/Getty Images

Londoners paid tribute to police and emergency workers at a vigil on Monday night as they remembered the victims of Saturday’s attack near London Bridge. The city’s mayor, Sadiq Khan, struck a defiant note, telling a crowd of thousands that London would never be broken by terrorism.

“London stands in defiance against this cowardly attack on our city, our people, our values and our way of life. I want to send a clear message to the sick and evil extremists who committed these hideous crimes. We will defeat you. You will not win,” he said.

“As a proud and patriotic British Muslim I say this: You do not commit these disgusting acts in my name. Your perverse ideology has nothing to do with the true values of Islam and you will never succeed in dividing our city.”

Earlier, police identified two of the three attackers who were shot dead by armed officers on Saturday night as they rampaged through Borough Market stabbing passersby. Khuram Butt (27), believed to have been the ringleader, was known to the authorities as a supporter of the banned Islamist group al-Muhajiroun.

Born in Pakistan, Butt was a British citizen and a keen Arsenal fan, who wore the club’s shirt as he carried out the murders on Saturday. Assistant Commissioner Mark Rowley, Britain’s top counterterrorism officer, said on Monday that Butt was known to police and MI5 but that there had been no evidence that an attack was being planned and he was moved to the “lower echelons” of those under investigation.

Butt appeared last year in a Channel Four documentary The Jihadis Next Door about the rise of Islamist extremism in London. He was shown praying with a group of radical Muslims in Regent’s Park, in front of the black flag of Islam, which is used by the so-called Islamic State, also known as Isis.

The second attacker named by police was Rachid Redouane (30), who claimed both Moroccan and Libyan heritage and who had lived in Ireland. He was not known to the police.

“Inquiries are ongoing to confirm the identity of their accomplice,” Mr Rowley said. “Work is ongoing to understand more about them, their connections and whether they were assisted or supported by anyone else.”

Liberal Democrat leader Tim Farron on Monday called for Donald Trump’s state visit to Britain to be cancelled after the US president ramped up his attack on Mr Khan. Mr Trump had criticised the mayor for telling Londoners there that was “no reason to be alarmed” by the sight of more armed police on the streets.

“At least 7 dead and 48 wounded in terror attack and Mayor of London says there is ‘no reason to be alarmed!’” he tweeted.

Mr Khan declined to respond but the president returned to the attack on Monday, after the media pointed out that he had misrepresented the mayor’s remarks.

“Pathetic excuse by London Mayor Sadiq Khan who had to think fast on his ‘no reason to be alarmed’ statement,” Mr Trump tweeted.