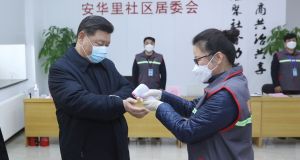 The coronavirus outbreak represents the single biggest challenge for Xi Jinping since he took the helm of the Communist Party eight years ago, but China analysts believe he will ignore widespread demands for greater freedom of expression and instead use the crisis to justify tightening central control.

The death of whistleblowing doctor Li Wenliang last Friday sparked uproar on Chinese social media platforms, with calls for free speech and demands for the government to apologise trending before the censors intervened.

Li had privately warned some colleagues and friends about a new virus circulating in Wuhan, before being quickly reprimanded by police and forced to sign an apology. He then contracted the coronavirus and died some days later.

His plight prompted national soul searching, and while the public outrage has now died down somewhat there is still widespread criticism of the authorities online, a highly unusual phenomenon in a rigidly controlled space.

In another rare development this week a group of academics in Wuhan published an open letter calling for freedom of speech to be respected in China, in accordance with the constitution, and for authorities to apologise to the whistleblowers and recognise Li as a national martyr.

The outbreak continues to spread. The Chinese National Health Commission reported on Tuesday 108 new fatalities attributable to the novel coronavirus – the first time more than 100 people have died from the disease in a single day – bringing the death toll to 1,018. It also confirmed 2,478 new cases of the illness, bringing that total to 42,638.

As pressure mounts over the way authorities mishandled the crisis in the early phases, state-run media announced on Tuesday that Hubei province’s two most senior health officials had been sacked.

Yet while Beijing is deflecting the blame to local authorities, it has not served to quell public anger.

“The eruption of anger is remarkable and perhaps unprecedented in the social media era,” said George Magnus, an associate at Oxford University’s China Centre and Research Associate at the school of Oriental and Asian studies (SOAS) in London.

“It’s visceral and spontaneous, capturing a mixture of grief, personal angst, and loss of trust in the authorities, which is code for the party,” he said.

Steve Tsang, director of the SOAS China Institute in London, said while a lot of the social media focus was on the doctor’s individual situation, much of the anger stemmed from frustrations with the system of governance.

“Dr Li was an unknown figure until he was seen as one of the eight whistleblowers who was silenced and punished, reflecting the real priorities of the party and Xi,” he said.

“Since [the public] cannot openly criticise Xi and his administration they have to express their anger by articulating grief for the young doctor. Xi must know that, hence the swift and tight censorship enforced.”

While the party is facing massive pressure, Donald Clarke, a professor at George Washington University law school in Washington DC, said that in the short term he could not see the crisis paving the way for any major reforms in the government’s “socialism with Chinese characteristics” system

“Although anything is possible – who predicted the collapse of the Soviet Union? – I am not holding my breath for big changes in China as a result of coronavirus,” he said.

“There’s a strong temptation to see any big scandal... as the thing that will finally usher in big changes. But they never do. The Communist Party has proved extremely resilient.”

There are many reasons for thinking this time is different to a certain extent, “but when we ask ourselves what the mechanism for this big change coming about would actually be, it turns out to be pretty hard to imagine”, Clarke said.

“I would say ‘watch this space’. It’s too soon to judge whether the reaction might be the leading edge of a broader public dissent,” said Magnus, whose most recent book is titled Red Flags: why Xi Jinping’s China is in Jeopardy. “But it’s clear that something is clearly draining the people’s trust in the party.”

Since coming to power Xi has abandoned presidential two-term limits – meaning he can continue to rule indefinitely – enshrined his “Xi Jinping Thought” into the constitution, and centralised his power to such an extent he has been dubbed the “Chairman of Everything”.

In recent years his administration has tightened its grip on human rights lawyers, activists, media, online platforms and across civil society.

He has kept an unusually low profile since the coronavirus crisis erupted.

The key lesson Xi will draw from this crisis is that the party failed him and thus he must tighten up control further, said Tsang, co-author of China in the Xi Jinping Era.

“So, yes, the fiasco will bring about changes, but I doubt it will be one to ensure local or regional leaders must respond better to public concerns or public health. It will be about strengthening Xi’s capacity to control, which was a key factor that brought about the crisis in the first place,” he said.

“Who is going to speak truth to power and antagonise Xi and pay the price for doing so?”

Magnus agrees that the government’s inclination will be to “double down on the control and stability drivers that got it into its current predicament” in the first place.

“We keep thinking it’s a matter of time or a catalyst for Xi’s China to re-embrace reform, openness and transparency. But the rhetoric in China is resolute that the party leads everything, and that China is in a long-term struggle against western standards, beliefs and values,” he said.

“I’m not necessarily saying President Xi is immune from factional struggle or replacement at some point, but the party’s mission is to rule unchallenged in perpetuity. For now, at least, that’s all that matters.”