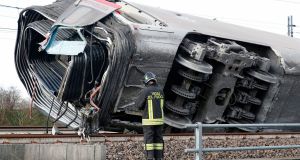 A high-speed train derailed in the northern Italian province of Lodi in the early hours of Thursday, killing its two drivers and interrupting traffic on the busy line between Milan and Bologna, officials said.

Video from the scene showed that the front engine and at least one passenger carriage had skipped the tracks, flipping onto their side. Photographs suggested the engine had broken clear of the rest of the train and smashed into an adjacent building.

The head of Italy’s civil protection unit said the two dead were the train drivers. A further 27 people were hurt, but none had life-threatening injuries.

“There shouldn’t be any more deaths,” the government representative in Lodi, Marcello Cardona, told reporters at the scene, adding it was lucky the toll hadn’t been higher.

Officials said only 33 people had been aboard the early morning train, which had left Italy’s financial capital Milan at 5.10 am and was heading to the southern city of Salerno.

It derailed at Livraga 20 minutes into its trip, about 40 km from Milan.

Italy’s state railways said it was investigating the accident. High speed trains from the south were having to stop at the northern city of Bologna, while morning services out of Milan were cancelled. – Reuters