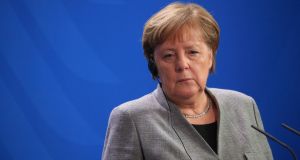 German chancellor Angela Merkel’s political future – and that of her government in Berlin – has been thrown into doubt with the snap resignation of her successor as leader of the ruling Christian Democratic Union (CDU).

Annegret Kramp-Karrenbauer announced she was not putting herself forward to lead the CDU in the next federal election, scheduled for autumn 2021. The 58-year-old, who was elected party leader just 14 months ago, will stand down once a replacement is found but stay on as defence minister in Dr Merkel’s government.

“I knew this would be a difficult time and the last two years have confirmed this,” said Mrs Kramp-Karrenbauer, adding she had made her decision “after considerable reflection” over a longer period of time.

Mrs Kramp-Karrenbauer is the latest victim of a political earthquake to hit Germany last week. Regional CDU politicians elected a premier in the eastern state of Thuringia who was also backed by the far-right Alternative für Deutschland (AfD).

After days of damage limitation, the departing CDU leader warned that “any kind of approach to the AfD weakens the CDU”. Those inside her party who back closer alliances with the AfD should, she said, consider their party membership.

Mrs Kramp-Karrenbauer’s sudden departure has triggered a wave of soul-searching inside the CDU, less than two years after the last. It also increases pressure on Dr Merkel, whose decision to stay on as German leader until the end of 2021 is seen by some as a contributory factor in Mrs Kramp-Karrenbauer’s difficulties.

Two years ago Dr Merkel plucked her successor from relative obscurity as a regional premier of the small southwestern state of Saarland and installed her as  general secretary in the CDU’s Berlin headquarters. Mrs Kramp-Karrenbauer struggled from the start and one senior CDU colleague told The Irish Times last week: “She really has no authority at all.”

Senior CDU figure Carsten Linnemann said her departure on Monday showed “just how deep the crisis the CDU faces, it is divided like never before”.

The Social Democratic Party, the CDU’s junior coalition partner in Berlin and no stranger to its own leadership crises, said it was “worrying for how long now the CDU has been leaderless”.

SPD co-leader Norbert Walter-Borjans triggered speculation of a snap election when, asked if he could imagine working with another CDU chancellor, said: “Our coalition deal is with Angela Merkel.”