Sudan agrees ex-president Bashir should appear before ICC over Darfur 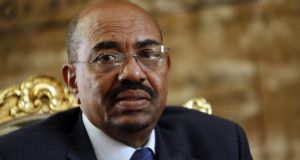 Then Sudanese president Omar al-Beshir at a meeting in Cairo in February 2009. Photograph: Khaled Desouki/AFP via Getty Images

Sudan’s government and rebel groups in Darfur agreed on Tuesday that all those wanted by the International Criminal Court should appear before the tribunal, a list that includes ousted president Omar al-Bashir.

Mr Bashir, who has been jailed in Khartoum since he was toppled after mass protests last year, is wanted by the ICC for alleged war crimes, genocide and crimes against humanity in Darfur.

Information minister Faisal Saleh did not specifically name him when announcing the move, but said the decision applied to all five Sudanese suspects wanted by the ICC over Darfur. Mr Bashir is one of the five suspects.

The government and the rebel groups reached an agreement during a meeting in South Sudan’s capital, Juba, that included “the appearance of those who face arrest warrants before the International Criminal Court”, said Mohamed al-Hassan al-Taishi, a member of Sudan’s sovereign council.

Mr Taishi also said that the two sides agreed to create a Darfur special court to investigate and hear cases including those investigated by the ICC.

That court would try Darfur suspects not indicted by the ICC, said Nimri Mohamed Abd, chief negotiator of the Darfur people in Juba. He said Darfur groups and Sudan’s government had agreed to “fully co-operate with the International Criminal Court”, and that the timing of the handover would be decided in final negotiations.

Mr Bashir’s lawyer said the ex-president refused to have any dealings with the ICC because it was a “political court”.

Mr Bashir has said the allegations made by the ICC, the world’s first permanent court for prosecuting war crimes, are part of a Western conspiracy.

A spokesman for the ICC declined to comment. The Hague-based court issued its first arrest warrant for Mr Bashir in 2009 – its first for a sitting head of state – and a year later issued a second one.

Mr Bashir faces five counts of crimes against humanity for murder, forcible transfer, extermination, torture and rape; two counts of war crimes for attacks against civilians; and three counts of genocide for killings and creating conditions meant to bring about the destruction of the targeted group, allegedly committed between 2003 and 2008 in Darfur.

Sudan’s civilian government, which is running the country under a three-year transition with the military, has been seeking to make peace with rebels in Darfur and other neglected regions that had been fighting Mr Bashir’s government for years.

Darfur rebels and residents have long demanded that Mr Bashir should be tried. Conflict spread in the impoverished western region in 2003 after mostly non-Arab rebels rose up against Khartoum. Government forces and mainly Arab militia mobilised to suppress the revolt were accused of widespread atrocities and genocide.

In Khartoum, where protesters gathered outside the prime minister’s office to call for a faster transition, opinion was split on whether Mr Bashir should be sent to The Hague.

“He should go straight to the criminal court because want peace in our country by any means,” said one young woman who gave her name as Reem. “If the [Darfur] movements want him to go, no problem. He’s already a war criminal in their view.”

But another protester, Mowafeq Othman, said handing Mr Bashir over would undermine Sudan’s courts. “Don’t hand him over, this would mean Sudan’s judiciary is weak – so long as he is a Sudanese citizen, regardless of anything else, he should be tried here,” he said.

A Sudanese court handed Mr Bashir a first, two-year sentence in December on corruption charges. He also faces trials or investigations over the killing of protesters and his role in the 1989 coup that brought him to power. – Reuters