WHO says coronavirus emergency is ‘public enemy number one’ 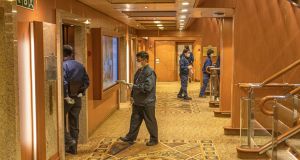 Quarantine officials on the Diamond Princess cruise ship that has been quarantined in Japan. Photograph: David Abel/Facebook/PA Wire

China’s coronavirus outbreak poses a “very grave threat for the rest of the world” and should be viewed as “public enemy number one”, the head of the World Health Organisation said on Tuesday.

WHO director-general Tedros Adhanom Ghebreyesus urged countries to step up measures to detect and contain the virus, especially in at least 30 countries with weaker health systems, where it could “create havoc”.

The virus has been named Covid-19, for coronavirus disease 2019, with no geographical association, he said.

Mr Tedros, referring to some governments’ counter-terrorism measures, said: “To be honest, a virus is more powerful in creating political, economic and social upheaval than any terrorist attack.

“A virus can have more powerful consequences than any terrorist action. If the world doesn’t want to wake up and consider this enemy virus as public enemy number one, I don’t think we will learn from our lessons,” he said.

China has reported 42,708 confirmed confirmed cases, including 1,017 deaths, Mr Tedros said, noting that there were fewer than 400 cases in 24 other countries with one death.

The WHO began a two-day meeting in Geneva, where it appealed for sharing virus samples and speeding up research into drugs and vaccines.

“The first vaccine could be ready in 18 months. So we have to do everything today using the available weapons to fight this virus while preparing for the long term using the preparations for the vaccines,” Mr Tedros said.

“With 99 per cent of cases in China, this remains very much an emergency for that country, but one that holds a very grave threat for the rest of the world,” he told more than 400 researchers and national authorities, including some taking part by video conference from mainland China and Taiwan.

Mr Tedros, speaking to reporters on Monday, had referred to “some concerning instances of onward transmission from people with no travel history to China”, citing cases this week in France and Britain. Five British nationals were diagnosed with the coronavirus in France, after staying in the same ski chalet with a person who had been in Singapore.

“The detection of this small number of cases could be the spark that becomes a bigger fire. But for now it’s only a spark. Our objective remains containment,” he said.

Hong Kong residents evacuated from a residential building where a man and woman confirmed with coronavirus live tested negative for the virus, health authorities said on Tuesday, easing concerns of a cluster of the outbreak in the Chinese-ruled city.

Many questions remain about the origin of the virus, which emerged at a wildlife market in the central Chinese city of Wuhan in December, and is spread by people in droplets from coughing or sneezing.

“We hope that one of the outcomes of this meeting will be an agreed roadmap for research around which researchers and donors will align,” Mr Tedros told the meeting.

China’s foremost medical adviser on the outbreak, Zhong Nanshan, said numbers of new cases were falling in some provinces and forecast the epidemic would peak this month. “I hope this outbreak or this event may be over in something like April,” said Mr Zhong (83), an epidemiologist who won fame for his role in combating an outbreak of Severe Acute Respiratory Syndrome in 2003.

Off Japan’s port of Yokohama, the Diamond Princess cruise ship with 3,700 passengers and crew remained quarantined, with the number of confirmed cases at 135. Thailand said it had barred passengers from getting off another ship, Holland America Line’s MS Westerdam, even though no confirmed infections have been found on board.– Reuters