Harry and Meghan standing down from royal family with ‘great sadness’

Britain's Prince Harry has made his first public speech since the decision for he and his wife Meghan Markle to step down as senior royals, saying he wanted his family to have a "more peaceful" life. Video: Sussex Royal 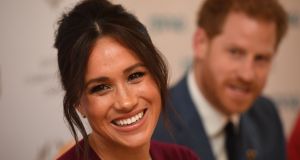 Prince Harry said he and his wife Meghan will continue to lead a life of service. Photograph: Jeremy Selwyn/AFP via Getty Images 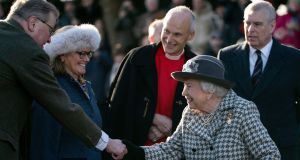 The queen said she recognised the “challenges” the couple had faced over the past year. Photograph: Will Oliver/EPA

Britain’s Prince Harry has said that he and his wife Meghan Markle were standing down from the royal family with “great sadness”, but there was “no other option”.

The duke of Sussex said he had hoped to continue serving the queen, the commonwealth and his military associations, without any public funding, but this was not possible.

In his first public speech since the couple’s decision to step down as senior royals, Harry (35) said he wanted his family to have a “more peaceful” life.

“Once Meghan and I were married, we were excited, we were hopeful, and we were here to serve. For those reasons, it brings me great sadness that it has come to this,” he said.

“The decision that I have made for my wife and I to step back, is not one I made lightly. It was so many months of talks after so many years of challenges. And I know I haven’t always gotten it right, but as far as this goes, there really was no other option.”

He added: “What I want to make clear is we’re not walking away, and we certainly aren’t walking away from you. Our hope was to continue serving the queen, the commonwealth, and my military associations, but without public funding.Unfortunately, that wasn’t possible.”

The duke was speaking at a dinner for supporters of Sentebale — his Africa-based charity supporting young people with HIV — at the Ivy Chelsea Garden in London on Sunday evening.

It comes a day after royal family talks concluded and the duke and duchess of Sussex announced they will stop carrying out royal duties from the spring, no longer use the title HRH, and will repay the taxpayers’ millions spent on their Berkshire home.

But Harry said the couple will continue to lead a life of service, and were taking a leap of faith.

“It has been our privilege to serve you, and we will continue to lead a life of service,” he said. “I will always have the utmost respect for my grandmother, my commander in chief, and I am incredibly grateful to her and the rest of my family for the support they have shown Meghan and I over the last few months.

“I will continue to be the same man who holds his country dear and dedicates his life to supporting the causes, charities and military communities that are so important to me.”

He added:“We are taking a leap of faith – thank you for giving me the courage to take this next step.”

Harry’s grandmother, the queen, issued a statement on Saturday, saying she recognised the “challenges” the couple had faced over the past year.

The queen said: “Following many months of conversations and more recent discussions, I am pleased that together we have found a constructive and supportive way forward for my grandson and his family.

“Harry, Meghan and Archie will always be much loved members of my family.”

She added: “I recognise the challenges they have experienced as a result of intense scrutiny over the last two years and support their wish for a more independent life.

“I want to thank them for all their dedicated work across this country, the Commonwealth and beyond, and am particularly proud of how Meghan has so quickly become one of the family.

“It is my whole family’s hope that today’s agreement allows them to start building a happy and peaceful new life.”

Meghan and Harry have already begun a transition phase of living in Canada and the UK.

The move was agreed by the queen, prince of Wales and duke of Cambridge following the Sussexes’ unprecedented statement released earlier this month.

It is understood the couple will now spend the majority of their time in Canada, with Harry expected to join his wife sometime this week.

The duke will continue to work with his charities and organisations like the Rugby Football League and Sentebale.

Harry will give up a commonwealth role and his three military appointments, the most prominent being Captain General Royal Marines.

All the new arrangements are due to come into effect in the spring and will be reviewed by Buckingham Palace in 12 months. – PA