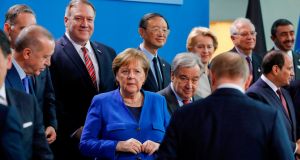 The weekend’s Berlin summit on Libya did not end fighting or ensure a peaceful resolution of the country’s civil conflict, but it may discourage external powers from transforming it into a Syria-style proxy war.

Convened on Sunday by German chancellor Angela Merkel, the summit brought together world and regional leaders with the aim of enforcing a tentative ceasefire and a United Nations arms embargo.

Among those attending were the external players who have armed and reinforced the warring sides.

On January 12th, Erdogan and Putin issued a joint call for a ceasefire which was accepted by Tripoli-based prime minister Fayez al-Sarraj but not Haftar. They were in Berlin but did not hold direct talks.

The Berlin summit committed external actors to refrain “from interference in the armed conflict” and called on them to respect the UN arms embargo and stop providing financial aid and mercenaries to the warring sides.

The summit’s final statement asks UN monitors to investigate breaches of the arms embargo and enforce sanctions on violators. The document calls on all parties involved to accept a ceasefire, withdraw heavy weapons and aerial vehicles, take steps to dismantle armed groups and militias and resume the political process.

Berlin’s recipe is unlikely to end the conflict. Even if the embargo is enforced, both sides are heavily armed and well supplied with mercenaries so they can continue fighting.

The conflict has roots in a long-standing struggle for power between Haftar’s east and Sarraj’s west. Strong pressure and sanctions could discourage or reduce external intervention.

Why is Europe worried?

Europe is seriously concerned about Libya for four reasons: