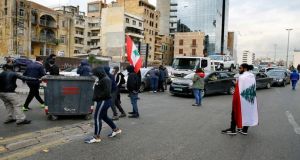 Lebanese efforts to finalise a new government stalled on Friday as hundreds of anti-government protesters blocked roads to mark the beginning of the fourth month of the uprising and called for mass demonstrations on Saturday.

Prime minister-designate Hassan Diab had expected his new government line-up would be approved by parliamentary factions after Shia Amal and Hizbullah grudgingly agreed to a cabinet comprising technocrats instead of politicians.

But there were complaints that eight of 18 potential ministers were associated with the ruling Christian-Shia bloc.

Although Diab’s choices for a neutral “specialist” cabinet have been publicised since the beginning of the month, most factions argue he does not enjoy enough backing to rule and some of his nominees have been chosen by Gebran Bassil, the toxic son-in-law of president Michel Aoun.

A Lebanese source told The Irish Times the political establishment has “gone backwards” to the sharp division into two camps created by the assassination of ex-premier Rafiq Hariri in 2005.

Even if Diab’s cabinet had won the parliamentary support required, anti-government protesters rejected Diab, a university engineering professor, on December 19th when he was asked by Aoun to form a government.

Protesters seek to overthrow the system imposed at independence in 1943 providing for ministerial candidates to be chosen by sect and according to sectarian quotas.

Stalemate within the political elite and between the elite and the street makes it all the more difficult to resolve Lebanon’s worst ever political crisis.

This past week has been the most violent during the uprising. While most protesters have remained peaceful, angry elements have smashed ATMs and windows at banks which are limiting withdrawals of Lebanon’s dwindling supply of dollars while wealthy depositors have, allegedly, transferred their money abroad.

So far, there has been no looting of banks. During confrontations, 25 security men and 50 protesters were injured and 100 arrested; all were released by Friday.

Lebanese middle- and working-class families suffer from the collapse of the currency and soaring prices of basic food items, including local products and produce. Hundreds of businesses, shops, restaurants, and cafes have shut and laid off employees while foreign workers have gone home. Hospitals no longer accept poor patients because the government has not paid for past treatment of the needy.

United Nations envoy to Lebanon Jan Kubis has castigated the police crackdown on demonstrators and warned that poverty could rise from 30 to 50 per cent of the population if there is no government to tackle the country’s economic decline.

International donors have withheld an $11 billion (€10 billion) rescue package until a cabinet is in place. The country has been administered by a caretaker cabinet since prime minister Saad Hariri resigned in October.

To complicate the situation, the Trump administration, which deems Hizbullah – a major Lebanese political party – a terrorist entity, has expanded a freeze on assets to cover the entire organisation rather than only its military wing.

Such US action is likely to make the movement all the more determined to ensure Lebanon has a Hizbullah-friendly government.