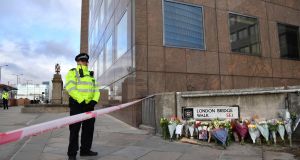 Floral tributes left close to London Bridge on December 1st, 2019, after the deadly terror incident in which two people were stabbed to death. Photograph: Getty

Boris Johnson’s government is to introduce tougher sentences for terrorist offences, ensure that those guilty of serious offences serve their full term and tighten monitoring of convicted terrorists on parole.

The measures are a response to last November’s attack near London Bridge in which two people were stabbed to death before the attacker, a convicted terrorist who had been released on licence from prison, was shot dead by police.

“The senseless terror attack at Fishmongers’ Hall in November confronted us with some hard truths about how we deal with terrorist offenders, which is why we immediately announced a review into sentencing and licence conditions, to do whatever is necessary to stop these sickening attacks from taking place,” said home secretary Priti Patel.

“Today we are delivering on those promises, giving police and probation officers the resources they need to investigate and track offenders, introducing tougher sentences, and launching major reviews into how offenders are managed after they are released. We will also review the support available for victims and their families to make sure they receive the help they need.”

The measures will be part of a new Counter-Terrorism Bill to be introduced during the government’s first 100 days in office. It will oblige terrorist offenders who receive extended determinate sentences to serve the entire time behind bars with no possibility of early release and mandate that those convicted of serious offences such as preparing acts of terrorism or directing a terrorist organisation spend a minimum of 14 years in prison.

The measures will not ban everyone convicted of a terrorist offence from being released on parole but will overhaul the system for releasing such prisoners on licence. The government will double the number of counter-terrorism probation officers and increase places in probation hostels to enable authorities to keep a close eye on convicted terrorists in the weeks immediately after their release.

“Terrorists pose a great risk to our society and our way of life, which is why we must bring them to justice and keep the public safe,” said justice secretary Robert Buckland.

“Coupled with our strong measures to manage terrorists behind bars, this Counter-Terrorism Bill toughens restrictions on offenders’ communications, increases the number of specialist staff managing them and will ensure they are monitored effectively.”

During last month’s election campaign, the father of one of the victims of the attack at Fishmongers’ Hall accused Mr Johnson of seeking to make political capital out of his son’s death. David Merritt, whose son Jack worked with prisoners and campaigned for reform of the prison system, said the prime minister saw the murder as a political opportunity.

“What was required was just a dignified approach, whereby the politicians would express their regrets, express their condolences to the people affected and would then get on with campaigning in the election – it wasn’t an election issue,” he told Sky News.

“Instead of seeing a tragedy, Boris Johnson saw an opportunity, and he went on the offensive and started talking about extending the tariff for prisoners serving sentences with a maximum of 25 years.”