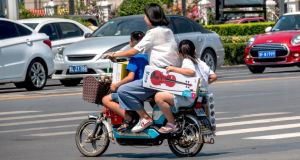 China may be close to abandoning its family planning policy limiting the number of children couples are allowed to have, state media reported, as it seeks to combat a rapidly ageing population.

The world’s most populous nation with about 1.4 billion people, China has gradually rolled back restrictions, ending the controversial “one-child policy” in cities in 2016 in favour of a new rule allowing most families to have two children, but it has not led to a significant improvement in the fertility rate.

According to a legal journal, the Procuratorate Daily, the new civil code measures could be introduced at China’s annual parliament, the National People’s Congress, in March 2020.

The Bill also includes measures to make it harder to get a divorce, such as a one-month “cooling-off” period during which a couple can withdraw their case.

The looming demographics crisis has even prompted speculation that rules barring single women from having children may be eased.

The proposals are being discussed by a group of senior legislators in Beijing. The government wants to add millions of extra children by the end of this decade, to make up 30 million more labourers in the workforce by 2050.

Birth rates in the region are falling as couples choose to have fewer children, in line with changing demographic patterns in middle-class societies worldwide. They are also scared off by high education costs and property prices.

The authorities had hinted change might be coming with a stamp due to be released for the Year of the Pig next year featuring a family of two pigs and three happy piglets.

The Communist Party says one-child policy helped reduce the number of births by 400 million. One of the greatest experiments in social engineering in human history, it was introduced in the late 1970s, after a period when China’s economy struggled to guarantee for its rapidly rising population.

However, the policy has led to serious demographic imbalances and a growing shortage of workers.

The State Council, or cabinet, last year projected that up to a quarter of China’s population will be 60 or older by 2030 – up from 13 per cent in 2010. There are also 30 million fewer women than men.

The pressure to boost the birth rate is keenly felt in places such as the poor northwestern province of Shaanxi, where authorities have urged a scrapping of all limits and called for incentives to encourage more babies, such as tax breaks and “baby bonuses”.

Other subsidies from local authorities to encourage more children include contributions towards the cost of a wedding, such as photographs and even pitching in towards a dress.