London Letter: Ambitions could be thwarted by electoral system and out-of-touch policies 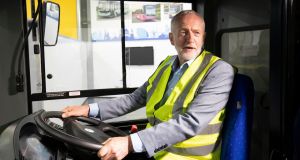 Labour leader Jeremy Corbyn’s left social democracy is so popular that the Conservatives have all but given up on opposing it. Photograph: Jane Barlow/PA Wire

With MPs enjoying their recess until early September, the parliamentary estate at Westminster is almost deserted save for teams of construction workers around every corner, patching up the disintegrating palace. Parliament broke up last month in a fever of plotting, much of it focused on the fate of Theresa May after Conservative Brexiteers rejected her Chequers proposal for a soft Brexit.

Conservative discontent has continued to simmer through the summer, fuelled by MPs’ contact with their constituency associations, many of which take a hard line on Brexit. But the chatter at Westminster has moved on to Labour in recent days amid speculation that MPs opposed to Jeremy Corbyn’s leadership are preparing to set up a new party.

“It’s not imminent, it’s gestating,” one plotter told me this week.

After a failed attempt to unseat Corbyn in 2016 and an unexpectedly good result in last year’s general election, many of the Labour leader’s internal critics have given up trying to defeat him. Corbyn’s supporters now control almost all the levers of power within the party and their grip is likely to tighten with elections to the National Executive Council next month.

The annual conference in Liverpool in late September will debate rule changes that could make it easier for local activists to deselect sitting MPs who are critical of Corbyn. For many of the 550,000 Labour members, many of whom joined to support Corbyn, such changes are a necessary enhancement of internal party democracy.

But for MPs unsympathetic to the leadership, the consolidation of the leadership’s power represents an existential threat as they fear they could be deselected before the next election.

For the anti-Corbyn plotters who imagine a political future outside Labour, there are two alternative historical models: the Social Democratic Party (SDP) of the 1980s and Emmanuel Macron’s En Marche. Simon Franks, an entrepreneur and philanthropist, has promised to put tens of millions of pounds into United for Change, a Macronist movement with himself as its figurehead.

Professional politicians are contemptuous of Franks, not least because of his anti-politics posture, and some Labour plotters dismiss his movement as a vanity project.

Those tempted by the SDP model envisage a two-stage process, starting with a group of Labour MPs resigning the whip and sitting independently in the House of Commons. Under the Fixed Term Parliament Act, the next general election is due in 2022, giving the rebels plenty of time to set up a new party structure after resigning the whip.

The SDP offers a precedent that is both auspicious and dispiriting, as it surged to above 50 per cent in the polls soon after it was founded and won more than 25 per cent in the 1983 general election, just three points behind Labour. Britain’s first-past-the-post electoral system meant, however, that the SDP-Liberal alliance returned only 23 MPs, compared to Labour’s 209.

Roy Jenkins, Shirley Williams and David Owen were high-profile politicians with senior cabinet experience and Bill Rodgers, the last member of the so-called Gang of Four who led the split from Labour, was a formidable figure within Westminster. No comparable figures are among today’s likely rebels.

The plotters expect Brexit to be the catalyst for a reshaping of British politics but they are unlikely to move before parliament determines how Britain should leave the EU, if at all. Most of the Labour rebels are enthusiastically pro-European and they hope to recruit some pro-EU Conservatives if Boris Johnson or Jacob Rees-Mogg succeeds May.

A new centrist party, whether it is modelled on the SDP or En Marche, can be confident of generous financial support from business and enthusiastic cheer-leading from a media that is almost universally hostile to Corbyn. It may struggle to get off the ground, however, not only because of the unforgiving nature of the electoral system for new parties but because of its policies.

Much of business and the media is pining for a revival of the social and economic liberalism that drove both Tony Blair and David Cameron and is shared by some of the most vociferous critics of Brexit. Voters are less enthusiastic, however, and Corbyn’s left social democracy is so popular that the Conservatives have all but given up on opposing it, instead offering their own, weaker version as they quietly abandon austerity and prepare to increase taxes and spending.