Removal from mausoleum to proceed despite opposition from dictator’s family 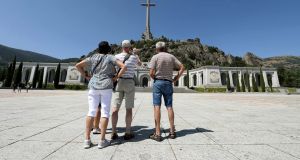 The Valley of the Fallen mausoleum near Madrid, where the remains of dictator Francisco Franco have lain in since his death in 1975. Photograph: JJ Guillen/EPA

Spain took another step towards dealing with the legacy of the civil war on Friday when the government approved the exhumation of the remains of the dictator Francisco Franco, which have lain in the Valley of the Fallen mausoleum near Madrid since his death in 1975.

The council of ministers voted in favour of the move, which was opposed by the right-wing Partido Popular (PP) and Ciudadanos parties. However, the decree needed only a simple majority to pass. Prime minister Pedro Sánchez’s Socialist party, the left-wing Podemos and the Catalan and Basque nationalists all voted in favour.

The decree means that, after a dispute lasting years, the removal of the former dictator’s remains will go ahead, probably later this year, despite opposition from Franco’s family.

“The government has taken this opportunistic, cowardly and vengeful decision,” the dictator’s grandson, Francisco Franco Martínez Bordiú, said. “This is just a trick to win votes for the left.”

Pablo Casado, leader of the PP, which emerged from the reformist wing of the old Franco regime, criticised Mr Sánchez for “reopening old wounds” in an effort to “cover up the fact that he is incapable of governing”.

Ciudadanos, which is going head to head with the PP for the right-wing vote, also criticised the move.

“It seems that some want to return to the fratricidal battles between reds and blues, of confrontation and division, which is what bipartisan politics likes,” Albert Rivera, the party leader, said, claiming this type of politics was as obsolete as “listening to music on cassette or vinyl”.

While the opposition argues that the decision will only reopen old wounds, the truth is that for millions of Spaniards the wounds have never healed. While Franco has lain in splendour 65km outside Madrid, until recently an estimated 140,000 of his opponents lay in unmarked graves around the country, buried where they were summarily executed during and after the civil war. The last of these executions was carried out in 1975.

In order to smooth the transition to democracy after Franco’s death, all parties agreed to a “pact of silence”, leaving the crimes of the civil war and its aftermath as unfinished business.

As a result, for decades before and after the transition, the “vanquished” in the civil war have had to live alongside the “victors”, often knowing that their neighbours or the local mayor are the very people who murdered members of their family or confiscated their property.

No one has been prosecuted and, despite plans to establish a truth commission, those who committed crimes under the dictatorship are protected by an amnesty.

There has been no attempt at reconciliation regarding the civil war and it is only in recent years, when the Association of Historical Memory was formed in the realisation that the witnesses to this history would all soon be dead, that the issue has been addressed and the nation shaken from its collective amnesia.

Every day fresh flowers are laid on Franco’s grave but the very fact that it exists as a monument is seen as an insult to the millions who suffered and were driven into exile by his regime. While it is a crime in Germany to venerate Hitler and the Nazis, in Spain there is a Francisco Franco Foundation dedicated to his memory.

The exhumation is expected to be carried out in secret to avoid protests and it is not yet clear where the remains will be reburied. The government has given the family 15 days to come up with a proposal. – Guardian