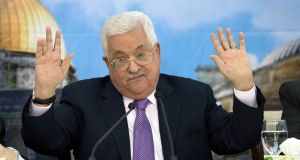 Palestinian president Mahmoud Abbas: Donald Trump’s actions may show he has transformed personal animus toward the Palestinians into US policy. Photograph: Atef Safadi

A Palestinian government spokesman has accused the US president of refusing to fulfil financial obligations to the Palestinians amounting to $500 million (€430 million) since the beginning of this year.

On Friday, the US announced it had cut more than $200 million in aid for the Palestinians, a move Yousef al-Mahmoud said was “part of the policy of blackmail and pressure practised by President [Donald] Trump towards the Palestinian leadership to force it to accept the so-called deal of the century”.

This is a plan, rejected by Palestinians and Arabs, being drafted by Trump’s son-in-law, Jared Kushner, for resolution of the Palestinian-Israeli dispute.

Trump’s actions over the past year show that, due to their rejection of his initiatives, he has transformed personal animus toward the Palestinians into US policy.

Following a review instigated by Trump, a senior state department official said, “At the direction of the president, we will redirect more than $200 million [allocated in 2017] in economic support funds originally planned for [2018] programmes in the West Bank and Gaza. These funds will now address high-priority projects elsewhere.”

The allocation was $251 million to be spent by USAid on mainly humanitarian projects.

Defunding is certain to harm impoverished Palestinians in Gaza. Of this sum, $60 million was spent on promoting West Bank Palestinian and Israeli security co-operation, which benefits Israel, while $25 million designated for Palestinian hospitals in occupied East Jerusalem has been put on hold.

Officials argue that US funds cannot go to Gaza since it is ruled by Hamas, which is regarded by Washington as a “terrorist” organisation, or to the West Bank because the Palestinian Authority pays pensions to families of Palestinians killed, wounded and jailed by Israel.

The deep rift between Trump and the Palestinians began with his recognition of Jerusalem as Israel’s capital last December. The status of the holy city is meant to be decided by negotiations between Palestinians and Israelis.

In response to Trump’s unilateral declaration, the Palestinian leadership cut ties with the US and rejected US mediation of peace talks between Palestine and Israel. Arab governments denounced the move and called for it to be rescinded.

The UN General Assembly declared Trump’s recognition “null and void” as it violated security council resolutions, prompting him to threaten to withhold US aid for 128 countries which voted in favour.

Trump then cancelled $300 million of the $365 million paid by the US to UNRWA, the UN agency responsible for the welfare of five million Palestinian refugees living under Israeli occupation and those in Jordan, Lebanon and Syria. The US contribution amounts to a quarter of UNRWA’s tight budget.

The administration has also pulled out of the 47-member UN Human Rights Council, claiming anti-Israel bias, and plans to cut payments to the council and the UN High Commissioner for Human Rights amounting to 22 per cent of the budget.

In October 2017, citing bias against Israel, the US announced it would withdraw from Unesco, the UN scientific and cultural organisation, a move effective at the end of 2018. The US halted funding for Unesco in 2011 after it admitted Palestine as a full member.

The US, which once paid 20 per cent of Unesco’s budget, now owes $600 million. Meanwhile, Trump continues to pay Israel the annual $3.8 billion granted by the Obama administration, the only one of its policies he intends to keep.