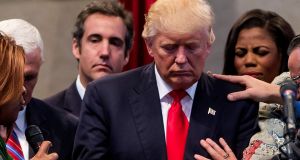 Michael Cohen, behind Donald Trump on the left, at a campaign stop at the New Spirit Revival Center in Cleveland, Ohio, on September 21st, 2016. Photograph: Eric Thayer/New York Times

Michael Cohen, Donald Trump’s longtime personal lawyer, dropped a bombshell this week as he confessed to paying hush money to two women to influence the 2016 election and said Trump told him to do it.

But Cohen’s admission to two criminal violations of campaign finance law does not leave the US president defenceless. Trump’s fate hinges on answers to several highly contested legal questions.

The bar for criminal prosecutions of campaign finance law is a high one, and it requires prosecutors to show that a person wilfully and knowingly violated the law.

“The biggest revelation in the plea deal ... is Cohen has admitted they did it for the purpose of influencing the election. It wasn’t for keeping it from Melania,” said Douglas Spencer, a law professor at the University of Connecticut, referring to Trump’s wife.

However, Cohen’s admission “doesn’t tell us what was in Donald Trump’s mind”, he added.

Any successful criminal prosecution would have to contend with the argument successfully made by John Edwards, a former Democratic presidential hopeful, who was indicted in 2011 for making hush money payments to his mistress, allegedly to hide the affair from voters.

He argued that the payments were actually to keep the affair hidden from his wife and family. The jury in his case acquitted him on one count and did not convict on the other counts.

“Making payments for hushing up old dalliances is hard to specifically relate to a campaign expense, and it’s certainly extremely subjective as to the motivations,” said Jan Baran, a partner at Wiley Rein and Republican campaign finance lawyer.

Trump may also argue that he was relying on Cohen, then his lawyer, to make any payment in a legal manner, Baran added.

The president appeared to allude to such an argument on Twitter on Wednesday as he tweeted: “If anyone is looking for a good lawyer, I would strongly suggest that you don’t retain the services of Michael Cohen!”

Prosecutors from the US Attorney’s office for the Southern District of New York, which prosecuted Cohen, would need to provide evidence that indicated that Trump knew the payments were illegal, but ordered them anyway.

In court on Tuesday, prosecutors said they could prove their case against Cohen using records they seized from his office, hotel, and home in April, “including hard copy documents, seized electronic devices, and audio recordings”.

Prosecutors said they had emails, messages from encrypted applications, and subpoenaed records from the Trump Organization and AMI.

An audio recording released by CNN last month showed that Trump was aware of the payment to McDougall before it was made.

“Does Michael Cohen have any recordings of conversations with Donald Trump that make clear that [he] knew these transactions were illegal?” said Paul Seamus Ryan, vice-president of policy and litigation at Common Cause, a non-profit advocacy group in Washington.

A civil case brought by the Federal Election Commission would not need to show a violation was wilful or knowing, said Ryan. The FEC could fine Trump and his campaign for taking illegal contributions and also for failing to disclose them, he added.

The highest bar to any criminal prosecution, however, is Trump’s status as president. Although the constitution does not explicitly rule out an indictment of a sitting president, some scholars have argued that impeachment is the proper course for holding a president to account.

The Department of Justice endorsed this view in 1973 and again in 2000, when the Office of Legal Counsel issued an opinion arguing that “the indictment or criminal prosecution of a sitting President would impermissibly undermine the capacity of the executive branch to perform its constitutionally assigned functions”.

Prosecutors are expected to follow DoJ rules and policies, which would preclude the Manhattan attorney’s office bringing a criminal case against Trump while he remains in office. – Copyright The Financial Times Limited 2018