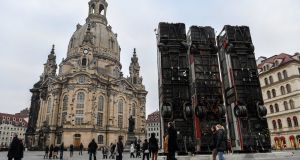 An art installation entitled Monument, created with three buses propped up vertically by Syrian-German artist Manaf Halbouni, which is adjacent to the Frauenkirche church in Dresden, Germany. The artwork is a reminder of barriers made of buses in the streets of Aleppo, Syria, that aimed to protect people from sniper fire. Photograph: Filip Singer/EPA

A provocative Dresden art installation has ramped up tensions ahead of anniversary of the British bombing of 1945 that claimed at least 25,000 lives and flattened the Baroque Saxon capital.

Monument, an installation by a German-Syrian artist, comprises three buses standing on their ends and recreates an image of a similar barricade erected by Aleppo rebels in 2015 as a makeshift street barrier against government snipers.

Artist Manaf Halbouni says the aim of the installation is to foster dialogue and recall the ongoing flight of people from war and terror.

“War is there even if it is far from us, particularly in Dresden,” he said. “This city lay in ruins but was rebuilt - work that showed other peoples that the reconstruction begins after the destruction.”

But extreme-right groups have protested against an installation which they say overshadows the memory of the Dresden bombing dead, reviving a long-running row as old as the bombing itself.

Many Dresdeners insist the British firebombing of their city, weeks before the end of the war, was a war crime because it focused on killing civilians.

For decades this view eclipsed efforts to look back before the bombing to Dresden’s own Nazi legacy.

More recent research, pinpointing the contribution of Dresden factories to the Nazi war effort, has done little to weaken local insistence that Dresden was an innocent target.

Ready to exploit this conviction over the years for political gain have been neo-Nazis, the anti-Islam Pegida group and, most recently, the right-wing populist Alternative für Deutschland (AfD) party which sits in Saxony’s state parliament in Dresden.

The AfD has dubbed the installation an “insult” to Dresden citizens. Others have taken issue at the site chosen: adjacent to the Frauenkirche (Church of Our Lady).

This collapsed after the 1945 bombing and, after decades as a pile of weed-strewn rubble, was rebuilt and reopened 60 years later as a symbol of reconciliation.

At the installation’s unveiling on Tuesday, far-right campaigners booed Dresden mayor Dirk Hilbert and shouted “Garbage!”, “Shame on you!” and “Traitor!”.

He has shrugged off the protesters, saying: “There are still attempts to repurpose history and allow Dresden stand there with its victim myth, but Dresden was no innocent city.”

In a nod to weekly protest marches by the Pegida group against Chancellor Angela Merkel’s refugee policy, the mayor added: “In our society there’s a growing opportunism to come out saying blunt things, and the lesson has to be: beware the beginnings.”

The installation has been welcomed by artists in Dresden, the city’s art school and Germany’s national media as an uncomfortable but necessary disturbance in Dresden’s carefully rebuilt old town.

“The barricade installation gives back the Frauenkirche its original meaning because, besides the kitsch of the [rebuilt] town square, this is a place of memory and reconciliation,” argued the Süddeutsche daily.

The atmosphere in Dresden ahead of this year’s anniversary is particularly charged, weeks after a senior AfD politician suggested it was time to move beyond Germany’s “guilt cult” and focus on German victims of war.

Artist Manaf Halbouni said the photos that inspired his installation showed no flag on the bus barricade.

“I want to start a conversation - and not have the feeling I have to duck for cover the whole time.”