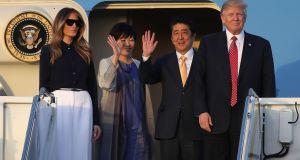 US president Donald Trump and his wife Melania Trump arrive with Japanese prime minister Shinzo Abe and his wife Akie Abe on Air Force One at the Palm Beach International airport as they prepare to spend part of the weekend together at Mar-a-Lago resort in West Palm Beach, Florida. Photograph: Getty Images

US president Donald Trump is considering issuing a new executive order banning citizens of certain countries traveling to the United States after his initial attempt to clamp down on immigration and refugees snarled to a halt amid political and judicial chaos.

Mr Trump announced the possibility of a “brand new order” that could be issued as soon as Monday or Tuesday, in a surprise talk with reporters aboard Air Force One late on Friday, as he and the Japanese premier headed to his estate in Florida for the weekend.

Mr Trump gave no details of any new ban he is considering. He might rewrite the original order to explicitly exclude green card holders, or permanent residents, said a congressional aide familiar with the matter, who asked not to be identified. Doing that could alleviate some concerns expressed by the courts.

A new order, however, could allow Mr Trump’s critics to declare victory by arguing he was forced to change course in his first major policy as president.

Whether or not Mr Trump issues a new order, his administration may still pursue its case in the courts over the original order, which is still being reviewed by the 9th US Circuit Court of Appeals.

White House Chief of Staff Reince Priebus told reporters late on Friday that taking the case to the Supreme Court remained a possibility, after another White House official said earlier in the day the administration was not planning to escalate the dispute.

“Every single court option is on the table, including an appeal of the Ninth Circuit decision on the TRO (temporary restraining order) to the Supreme Court, including fighting out this case on the merits,” Mr Priebus said.

“And, in addition to that, we’re pursuing executive orders right now that we expect to be enacted soon that will further protect Americans from terrorism.”

Mr Trump’s original order, which he called a national security measure meant to head off attacks by Islamist militants, barred people from Iran, Iraq, Libya, Somalia, Sudan, Syria and Yemen from entering for 90 days and all refugees for 120 days, except refugees from Syria, who were banned indefinitely.

The abrupt implementation of the order plunged the immigration system into chaos, sparking a wave of criticism from targeted countries, Western allies and some of America’s leading corporations, especially technology firms.

A federal judge in Seattle suspended the order last Friday after its legality was challenged by Washington state, eliciting a barrage of angry Twitter messages from Trump against the judge and the court system. That ruling was upheld by an appeals court in San Francisco on Thursday, raising questions about Mr Trump’s next step.

An official familiar with Mr Trump’s plans said if the order is rewritten, among those involved would likely be White House aide Stephen Miller, who was involved in drafting the original order, as well as officials of the National Security Council, Justice Department and Department of Homeland Security.

It is not clear if a new order from Mr Trump would immediately put a travel ban back in place, or if those who have filed lawsuits, including the state of Washington, would succeed in asking the same judge for another hold.

Should mr Trump issue a new order, he is still likely to face legal challenges, as opponents could ask the court to let them amend their complaints, said Alexander Reinert, a professor at Yeshiva University’s Cardozo School of Law in New York.

On Air Force One, Mr Trump addressed the San Francisco court fight, saying: “We will win that battle. The unfortunate part is that it takes time statutorily... We need speed for reasons of security.”

The matter could move forward next week. An unidentified judge on the 9th Circuit on Friday requested that the court’s 25 full-time judges vote on whether the temporary block of Trump’s travel ban should be reheard before an 11-judge panel, known as en banc review, according to a court order. The 9th Circuit asked both sides to file briefs by Thursday.

In a separate case on Friday, Justice Department lawyers argued in federal court in Alexandria, Virginia against a preliminary injunction that would put a longer hold on Mr Trump’s executive order than the Seattle court ruling, but focused solely on visa holders.

Judge Leonie Brinkema asked the administration for more evidence of the threat posed by citizens of the seven countries.

Aboard the flight with Trump were his wife Melania, daughter Ivanka, son-in-law Jared Kushner and Japanese prime minister Shinzo Abe and his wife Akie. The Trumps landed in the evening and went to their Mar-a-Lago estate in Palm Beach.