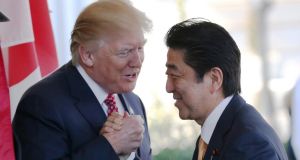 US president Donald Trump has pledged to “rapidly” announce further measures to increase the security of the United States as he criticised a decision by a federal court to uphold a freeze on his controversial travel ban.

Speaking alongside Japanese prime minister Shinzo Abe in the White House on Friday, Mr Trump said he had “no doubt we will win” the case, after a three-person court ruled late on Thursday that the temporary stay on the executive order restricting immigration from seven countries should remain.

Earlier Mr Trump reacted furiously on Twitter to the court’s ruling, tweeting: “SEE YOU IN COURT, THE SECURITY OF OUR NATION IS AT STAKE!”.

In their 29-page ruling, judges for the ninth circuit court of appeals said they had found “no evidence” that anyone from the seven countries affected by the ban had committed terrorist offences, though they stopped short of ruling on whether the ban was targeting Muslims.

The justice department said it was reviewing the decision and considering its options. While an emergency appeal to the supreme court is possible, the current vacancy at the highest court in the land could frustrate a swift resolution. As a result the justice department may choose to also refer the case back to the appeals court in San Francisco, or to revise the original executive order.

Pressure continued to mount on Mr Trump’s executive order – which has now been suspended for almost a week – on Friday, with Virginia becoming the latest state to file a challenge to the order. The state, which brought the case on behalf of travellers detained at Dulles airport just outside Washington, argued that its universities had been affected by the ban, echoing a key argument of the Washington state attorney general.

Relations between Washington and Tokyo have been in the spotlight since Mr Trump suggested during the presidential campaign that US military bases in Japan and South Korea were too expensive, and floated the idea of both countries arming themselves with nuclear weapons.

But speaking alongside the Japanese leader, Mr Trump said the United States was “a fully engaged partner” and would work to “further strengthening our very crucial alliance”.

On trade, Mr Abe said he welcomed the establishment of a working dialogue framework led by the two vice-premiers of both countries, following the withdrawal by the United States from the Tran-Pacific Partnership (TPP), a multilateral trade deal between the United States and 12 Asian-Pacific countries including Japan.

In particular, Tokyo is concerned about the impact of any new import tax on Japanese car exports to the United States.

It follows objections by a number of members of parliament, including Commons speaker John Bercow, to Mr Trump addressing the Houses of Parliament.

Mr Trump’s national security adviser Mike Flynn was also under fire on Friday over allegations that he discussed the possibility of easing US sanctions against Russia with Russian ambassador Sergey Kislyak in the month before Mr Trump was sworn in as president.

Similarly, Trump adviser Kellyanne Conway was in the spotlight after she said in an interview with Fox News that people should buy Ivanka Trump products, prompting calls for her to be referred to the federal ethics agency. Ms Conway was speaking about the controversy over retailer Nordstrom’s decision to stop stocking Ms Trump’s apparel line, and her father’s subsequent criticism of the store on Twitter.

During a discussion on the controversy on Thursday, Ms Conway encouraged people to “go buy Ivanka’s stuff”, in a comment that critics said could be in breach of strict federal ethics rules which prohibits White House employees from promoting products. The White House said Ms Conway had been “counseled” on the issue.