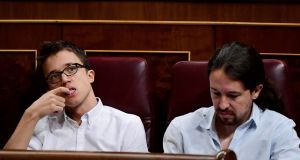 Spain’s Podemos party will hold a national assembly this weekend, hoping it can bring to a close a civil war that threatens to tear apart the three-year-old leftist force.

Podemos leader Pablo Iglesias (38) goes into the event at Madrid’s Vistalegre stadium at loggerheads with his deputy, Íñigo Errejón (33), over party strategy.

The two were once close friends and political soulmates, and their falling-out over recent months has become increasingly public.

“It’s almost like a reality TV show. People are following what’s happening in Podemos as if it were a soap opera,” Raúl Camargo, a deputy for the party in the Madrid regional parliament, told The Irish Times.

“We need to highlight the political issues more and stop the infighting.”

Founded in 2014 with promises to represent those affected by the country’s recent economic crisis and to fight the corruption-tainted elites, Podemos swiftly made its mark.

Alliances backed by the party took control of major cities such as Madrid, Barcelona, Zaragoza and Cádiz in municipal elections in 2015.

In the general election later that year, it became Spain’s third political force.

The ponytailed Iglesias and the boyish Errejón were the most recognisable faces of the movement and they appeared to be in step.

However, with Spain’s parliament in a stalemate after that result, cracks in their relationship began to appear.

Errejón was more eager than his colleague to reach out to the Socialist Party in order to form a left-leaning governing partnership.

In the end, no such deal was reached. Instead, Podemos chose to run in tandem with the smaller, communist-led United Left in June’s election rerun, causing further frictions.

Errejón was uneasy at Podemos presenting itself as an overtly leftist party, rather than a transversal force that could appeal to voters in the centre ground. The electoral merger backfired and the two parties lost about a million votes.

As they now seek to revitalise the party, the two men will present competing strategy platforms for members to vote on this weekend.

“Our proposal is much closer to the original spirit of Podemos: not to resemble the traditional political parties in any way,” Iglesias has said.

“We shouldn’t be a traditional political force that dedicates itself basically to parliamentary activity.”

Errejón, by contrast, has warned that in following such a path, Podemos risks “making some of the mistakes of Spain’s traditional left”.

“We no longer need to get obsessed about showing Spain that we can disrupt things and upset the chess board,” he said.

“Now we need to ensure people can imagine us running the country.”

The split, which has broadly divided the party into pablista and errejonista camps, has sparked a vicious war of words, much of it played out on social networks.

Reports have also emerged that a plan to oust Iglesias earlier this year was being plotted by Errejón supporters.

Earlier this month, Antonio Montiel, the head of Podemos in Valencia, compared the leadership style of Iglesias to that of Saddam Hussein and Spain’s own dictator, Francisco Franco.

That followed the resignation of Carolina Bescansa, of the party’s core leadership, who complained that the feud resembled a “train crash”.

On the hard left

Political strategist Iván Redondo said the Iglesias camp’s plan to keep the party on the hard left makes electoral sense, avoiding the need to fight the established parties in the centre ground.

However, polling by his firm, Redondo y Asociados, shows that while Iglesias is a much more popular figure than his deputy within Podemos, Spaniards as a whole prefer Errejón.

“The Vistalegre assembly should have been the political space for debate, where they got to grips with their ideological issues in order to take off again,” Redondo said. “But instead, it’s going to be a referendum on Pablo Iglesias.”

If his proposals do not win out, Iglesias has promised to step down as leader. Errejón would be an obvious replacement, although he has not presented a formal leadership candidacy.

“There are people who have felt frustrated since June 26th, the last general election, because we didn’t win,” said Camargo. The Madrid deputy represents Anticapitalistas, a third faction in the party that is distanced from the main conflict.

“But there’s also frustration due to the infighting,” he added. “It’s very hard to see very deep political differences [between Iglesias and Errejón] beyond a fight for control of the organisation.”