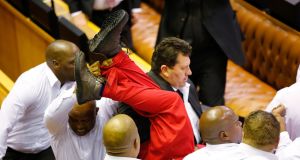 Security officials and members of the opposition Economic Freedom Fighters engage in a brawl in the National Assembly in Cape Town during a speech by South Africa’s president Jacob Zuma on Thursday. Photograph: Sumaya Hisham/AFP/Getty Images

South Africa’s opposition Democratic Alliance party is to take court action over the an outbreak of violence in the National Assembly on Thursday.

Speaking to reporters on Friday, Democratic Alliance (DA) leader Mmusi Maimane said his party would seek a high court ruling stating it was unconstitutional for government to deploy members of the South African National Defence Force to parliament for non-ceremonial purposes.

“Our court action is to ensure the integrity of parliament is restored, and that we can make the work of parliament about the people of South Africa once more,” Mr Maimane said.

A session of the parliament in Cape Town, convened for a state-of-the-nation address by South Africa’s president, Jacob Zuma, descended into chaos on Thursday as politicians from the left-wing Economic Freedom Fighters (EFF) brawled with orderlies.

Anticipating trouble, Mr Zuma’s government had earlier deployed more than 400 soldiers to join security outside parliament during his speech.

Opposition to Mr Zuma’s rule has grown steadily in recent years and the EFF, led by former African National Congress (ANC) youth league leader Julius Malema, has been particularly scathing of his leadership. Critics of the decision say the troop deployment was designed to intimidate those who might try to undermine Mr Zuma in front of the world.

The government, however, insisted the troops were to be deployed only to potential flash point areas outside of parliament in the event of violent anti-government protests.

However, after the brawl broke out in the National Assembly between EFF MPs and parliamentary security tasked with removing them from the building, it was claimed military police were seen inside parliament. The opposition DA says this is against the law.

Parliamentary security officials have also been accused of using excessive force and pepper spray in the public gallery. The speaker of the house, Baleka Mbete, was also accused of flouting the proper procedure for expelling members from the chamber.

Ms Mbete’s approach to dealing with the disruptions has been roundly criticised. On Friday, even the governing ANC’s parliamentary caucus confirmed it would write to her to ask why armed soldiers were in the parliamentary precinct during Mr Zuma’s address.

But the ruling party laid blame for the fracas at the EFF’s door. Chief whip Jackson Mthembu hit out at the EFF, saying the ANC was deeply disturbed by the “reprehensible and deeply embarrassing conduct of members of parliament, which displayed itself last night in full view of the national and international community”.

The EFF has denied any wrongdoing. On Thursday, after being thrown out of parliament, Mr Malema said the EFF’s actions were designed to stop a man who had “broken his oath of office” from addressing parliament.

This was an apparent reference to a constitutional court ruling last year which stated Mr Zuma had failed to adhere to a ruling by the public protector. The watchdog body had recommended he pay back millions of rand in taxpayers’ money to the National Treasury for work done on his private residence.

On Friday the president played down the violence, telling reporters at a breakfast briefing that the EFF was just an “angry minority in the country” and that the fighting “does not bother me”.