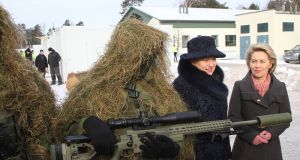 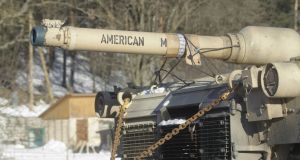 Russia and Nato member states have accused each other of threatening behaviour amid a continuing build-up of military hardware, troops and manoeuvres in eastern Europe.

Nato is in the process of deploying four battalions of soldiers and armoured vehicles to Poland, Latvia, Lithuania and Estonia, which have been alarmed by Russia’s annexation of Crimea and fomenting of a separatist conflict in eastern Ukraine.

At Bucharest’s request, Nato is also looking to boost its presence in Romania and use it as a base for closer surveillance of the strategic Black Sea region, while the United States last year activated part of a missile defence system in the country.

“This deployment is, of course, a threat for us,” Russian deputy foreign minister Alexei Meshkov said of Nato battalions in Poland and the Baltic states that will be led by forces from the US, Britain, Canada and Germany. “And who said that it will end with this? We do not have such information. For the first time since the second World War, we see German soldiers along our borders.”

Another senior Russian foreign ministry official, Alexander Botsan-Kharchenko, said: “Romania’s stance and the stance of its leadership, who have turned the country into an outpost, is a clear threat for us.”

Nato and its members insist that their activities are purely defensive and that the latest deployments are dwarfed by forces the Kremlin has stationed in western Russia and in its heavily militarised Baltic enclave of Kaliningrad.

Concern over Moscow’s intentions has been heightened by its plans for major war games later this year. The exercises, dubbed Zapad 2017 (West 2017), are scheduled to take place in western Russia and on the territory of its ally, Belarus.

“We see that risks are increasing and we are worried about the upcoming Zapad 2017 exercise, which will deploy a very large and aggressive force that will very demonstrably be preparing for a war with the West,” said Lithuanian president Dalia Grybauskaite after talks with her counterparts from Estonia and Latvia. “This means that we will be talking with Nato about creating additional standing defence plans, about stationing additional military means and about creating a faster decision-making process.”

Russia and Nato members regularly trade accusations of intensifying military air and naval activity close to each other’s borders, and Lithuanian defence minister Raimundas Karoblis called for heightened vigilance during Zapad 2017, which is due to take place in September.

“We will take countermeasures, including with our allies, to avoid any provocations,” he said.

Nato members, particularly in eastern Europe, have been alarmed by US president Donald Trump’s conciliatory language towards the Kremlin and his calls for warmer ties with Russia despite its continued aggression in Ukraine.

Mr Trump has also described Nato as “obsolete”, but Ben Hodges, commander of US forces in Europe, said the current deployments sent a clear message to allies and potential adversaries alike.

“When you put soldiers on the ground, tanks like this, that signifies a long-term commitment,” he said.