Can a no-deal Brexit be prevented by the UK’s parliament?

If nothing changes between now and October 31st, UK will leave EU without a deal 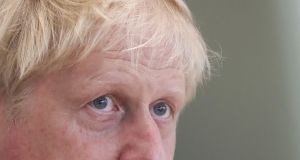 British prime minister Boris Johnson: Downing Street officials have said it is “laughable” to think that he would stand aside if MPs vote down the government. Photograph: Simon Dawson/EPA

After less than a month in office Boris Johnson’s nascent government is squaring up for a no-confidence vote, attempts to halt Brexit and possibly a general election. When parliament returns from its summer recess on September 3rd, pro-Remain MPs are all but certain to hold a no-confidence vote to try to bring down the government in an effort to stop the UK leaving the EU without a deal.

But the prime minister and his advisers – led by Dominic Cummings – believe that the threat to their Brexit plan is surmountable. If the government falls, Johnson intends to stand firm, hang on in office and delay an election until after October 31st, when the UK will automatically leave the EU. Will their plan work?

Can the Johnson government survive a no-confidence vote?

It is uncertain. After losing the Brecon and Radnorshire byelection last week, the Conservative party has a working majority of just one. It may soon be reduced further: Phillip Lee, one of the few Tory MPs campaigning for a second referendum, is rumoured to be on the verge of defecting to the Liberal Democrats, which would leave the government without its majority.

There are also several pro-Remain Conservative MPs – led by former attorney general Dominic Grieve – who have hinted they would abstain or vote against the government to halt a no-deal Brexit. This may just be rhetoric – voting against their own party and government is likely to lead to deselection and the end of their political careers. But many see the threat posed by leaving without a deal as greater than fears over their own futures.

If the government fell, would Johnson resign as PM?

Under Britain’s informal constitution, losing a confidence vote means that the prime minister should resign. But this is only a convention – and it appears to be one that Johnson’s team is happy to ignore. Downing Street officials have said it is “laughable” to think that the prime minister would stand aside if MPs vote down the government.

Catherine Haddon, a senior fellow at the Institute for Government think tank, says that “political pressure might be the only weapon” MPs have to immediately push out Johnson. “The wording of the current law does not automatically force a prime minister to resign in the aftermath of a no-confidence vote. It is possible for him to stay in post and choose the general election that follows.”

After losing the confidence of the Commons, a 14-day cooling-off period follows in which an alternative government could emerge. This is when Grieve and his allies hope to form a “government of national unity”, comprising MPs from multiple parties who want to avoid leaving the EU without a deal.

Who would decide the timing of a general election?

If an alternative government is not formed, Britain will head to the polls. An election would have to be called within 25 days after the expiry of the cooling-off period. The exact date of the poll is chosen by the incumbent prime minister. The timing is formally decided by Queen Elizabeth, but comes on the advice of her government.

Given Johnson’s strong desire to see through Brexit, he would ask Buckingham Palace to delay polling day to ensure it comes after October 31st – so the Article 50 clock would tick down and the UK would be ejected from the EU. This may face a legal challenge – some prominent lawyers are already mooting this idea – but time is against them. The election timing is set by Downing Street and there are few laws that dictate exactly what happens next.

What would happen in an election?

An election is likely to involve another rerun of the Brexit argument. Cummings has talked of a “people vs politicians” campaign, pitting supporters of leaving the EU against MPs who voted against the government and tried to halt Brexit. The Lib Dems would fight on a Remain platform, even after a no-deal Brexit, while the Labour Party is likely to seek to focus mostly on domestic issues.

If an election was held in early November, soon after a no-deal Brexit, Johnson would hope to attract most of the Leave vote – limiting the impact of the Brexit party – while the Remain vote would be split between the other parties. But the success of the Tories would rest on what a no-deal Brexit looks like.

If there is major disruption, it could prompt a backlash against his government. Should it be manageable, the prime minister could say he has proved the naysayers wrong.

Will the UK still leave the EU?

If nothing changes between now and October 31st, Britain will automatically leave the EU without a deal, whether it has a government or not. Article 50 was triggered (and extended twice) so unless Johnson or another prime minister requests another extension or revokes the decision to leave, Brexit will occur.

There is scant chance of this prime minister – who stood for the leadership on a platform of leaving the EU “come what may, do or die” by October 31st – halting or delaying Brexit.

If pro-Remain MPs cannot force an election before Brexit day, their final hope is that the cabinet secretary, Mark Sedwill, can enforce a traditional interpretation of “purdah”, in the run-up to polling day. Usually this means that civil servants do not implement major policy changes during an election campaign. There is much debate in Whitehall about whether or not leaving the EU would count as enforcing a new policy.

But according to Haddon this “caretaker convention” is a custom, not a law, to ensure the civil service remains impartial during an election. She pointed out that during a campaign in which the direction of Brexit is disputed “civil servants might find themselves in a very difficult position on whether to press ahead with government policy and it could mean some kind of showdown”.

However, officials in the Johnson government say they have no intention of respecting conventions on purdah or policy neutrality during elections. Instead their focus is to do absolutely everything in their power to ensure Brexit is delivered. – Copyright The Financial Times Limited 2019