Undocumented in Ireland: ‘You feel trapped, the pressure is crushing’

‘I do the same things as Irish people. I just want to continue my education’ 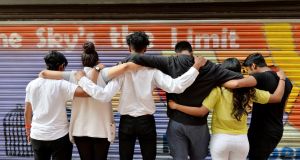 After nearly a decade living in Ireland Sarah* is tired of lying to her friends. She’s fed up making excuses when they invite her on trips abroad and wishes she could join them as they head off to university later this month.

Last June, Sarah sat her Leaving Cert and in August she was offered a place study Law at NUI Galway. However, her undocumented status means the 17-year-old student will be unable to continue her studies at third level.

“I was thinking of deferring the place but the fact that I’m still undocumented means I can’t get a job and work so I can’t support myself there. It’s difficult but at the end of the day you just have to tell yourself that’s the way it is now. You will get there eventually, it’s just gonna take longer. You just have to keep positive.”

Sarah’s mother pays taxes through her job but hasn’t taken a day off work in two years for fear of revealing the truth about her immigration status. “I don’t feel sorry for myself because I’m living here and whatever the situation is I’m trying to keep myself happy. But it is tough,” says Sarah.

Sarah is one of the estimated 3,000-5,000 undocumented young people and children living in Ireland. According to the Migrant Rights Centre Ireland (MRCI), there are between 20,000-26,000 undocumented people of all ages living and working on our shores. Like Sarah, nearly half of these people have lived in Ireland for more than eight years.

Last week US president Donald Trump announced he was ending the Daca programme which gives temporary immigration status to people who arrived in the US illegally as children. Thousands have taken to the streets across the United States protesting the decision to end the programme introduced under Barack Obama which gave young undocumented people, known as dreamers, a pathway to citizenship.

But what about here in Ireland? Are there programmes like Daca in place to support our own dreamers who like Sarah have spent a large part of their lives in Ireland and want to progress into third level education?

According MRCI director Edel McGinley, the Government has introduced “no measures” to help regularise the immigration status of young people and children who came here with their parents. “We’ve had calls from the United Nations to implement schemes for children and young people and that’s been ignored,” said Ms McGinley. “The Government has consistently ignored and not acknowledged undocumented people in the State and it’s absolutely ludicrous and scandalous.

Mark* was 10 when his family moved to Ireland. He sat his Leaving Cert two years ago and recently completed a level 5 business course. However, he has struggled to find a level 6 course which doesn’t require proof of his immigration status.

“You feel trapped and the pressure is crushing you with that burden on your shoulders. Sometimes you just lock yourself in your room and it feels like you’re isolated from the world.”

Adrianna*, who is in sixth year and is originally from Mauritius, is honest with her friends about her status. However, she had to lie to her favourite teacher when she was invited to apply to travel to Lourdes as a volunteer.

“That teacher has taught me since I came to school. When I arrived I didn’t speak English and she sat down and helped me. She’s always been so kind and I feel like I lied to her. I don’t like doing it.”

Adrianna’s family recently faced the financial implications of being undocumented when her father became ill with heart problems. “He didn’t have a medical card so he had to pay the full fees. They did take care of him but he was last on the list, he wasn’t a priority.”

Adrianna hopes to study French at Maynooth University after school and become a teacher. “To call myself an Irish citizen, I already think of myself like that. I live here and go to school here. I do the same things as Irish people. I just want to continue my education.”

A spokesman from the Department of Justice said “persons illegally in the State” could present their case on its individual merits to the immigration authorities and that cases would be considered “on an individual basis”.

“Ireland has a reputation as an open and welcoming society and there are a wide range of schemes and policies to facilitate legal migration into the State,” he said.

*Names have been changed to protect anonymity of young people interviewed