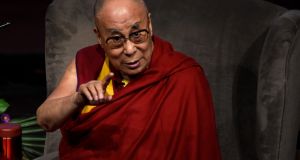 The Dalai Lama said developed countries are in “crisis” as he urged a greater sense of compassion and love.

The Tibetan spiritual leader called for a century of peace during a visit to Northern Ireland.

He said thinking which led to warfare was outdated — referring to fighting in Burma, Iraq and Syria.

The 82-year-old said: “Our goal should be a century of peace, a century of dialogue based on a sense of oneness of seven billion human beings.”

He said there was too much war, fear, distrust and anger. Global warming was a “major disaster”. He added: “We have to work together.” He was in Derry as a guest of charity Children in Crossfire.

The Dalai Lama said he was a supporter of Europe: “I am an admirer of the EU.”