After having to declare herself homeless Toni O'Reid has now been living a hotel room for 15 months with her two daughters. Video: Enda O'Dowd 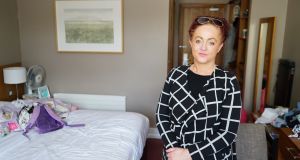 Homeless Dublin mother Toni O’Reid who has lived in a hotel room for the past 15 months with her two young daughters. Photograph: Enda O’Dowd

A homeless mother of two has spoken of feeling “abandoned” having spent the last 15 months living in a hotel room with her young family.

Toni O’Reid’s difficulties began with a relationship breakdown in the family home in Drogheda, after which she and her girls aged 5 and 9 spent a period staying with friends and family in their native Dublin between October 2015 and June 2016 before officially declaring as homeless.

Ever since then she has been staying in a double-bed room in a Dublin hotel, and says her children literally have to “eat off the floor” due to a lack of suitable dining space.

“We’d have to eat sitting down on the floor or on one of the side cupboards if you can find space,” she told The Irish Times.

“You get a sense of cabin fever. The children don’t like coming back. They have no friends, no fresh air. That to me is the mentally hurtful thing, it’s very uprooting for the children,” she added.

Her girls are just two of the 2,973 children who are homeless across the State, according to latest figures from July, which represents a sizeable proportion of the country’s 8,000-strong homeless population.

Their small room is packed with toys, school materials and all manner of items essential for everyday living, and Ms O’Reid says her daughters are sometimes teased over their predicament.

“They would be taunted by kids, ‘oh are you living in a hotel’, and the older one gets very embarrassed about that.

“That was very hard for me. Their daddy had them the last two Christmases, that was very difficult. I’m hoping this year I can be with them for Santy,” she said.

Ms O’Reid is upset at the lack of interest she feels the authorities have displayed in her situation, and says she has received just one letter from Dublin City Council over the 15 months and has not been allocated a key worker due to staffing shortages.

‘Cried myself to sleep’

“Nobody has contacted me. I feel very alone.

“I’ve cried myself asleep many a night with the children, just feeling that despair of no way out, being caught in this bubble or rut. Where do you go, where will I find a house? You have all these things hitting you at the one time.

“I need 100 per cent stability for the children and for their schooling, because they’re only young. I don’t want them thinking this is normal.”

Ms O’Reid says her situation is illustrative of how anyone can find themselves homeless having worked all her life.

“I had everything and lost everything, and never thought that I’d find myself in this situation, never ever,” she said.