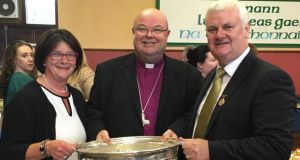 Protestants in west Cork “dread” commemorations of the War of Independence and the Civil War, Church of Ireland Bishop of Cork Paul Colton has said.

“Among some in our Church of Ireland community (and I’m sure they are not alone) the commemorations are anticipated fearfully and with a certain dread,” he said.

“Our recent West Cork History Festival in Skibbereen hit the news headlines. The courageous steps taken by our own Canon George Salter to tell his family’s story as he, now in his 90s, inherited it drew heated debate. Among many there is still an enduring reluctance to talk.”

Canon Salter served for many years as a Church of Ireland minister in Cork city. In the documentary An Tost Fada (The Long Silence), first broadcast on RTÉ in 2012, he disclosed how in 1922 his father, six aunts and two uncles fled Dunmanway in1922 after getting a warning following the massacre of neighbouring Protestants.

An Tost Fada was shown again on July 29th as part of the inaugural West Cork History Festival in Skibbereen.

Bishop Colton also recalled how “about 18 years ago” he visited a Methodist woman in Cork on her 100th birthday. He asked her what “time in your life sticks out in your memory?”

He said that she got upset, and told him: “The Troubled Times; they were terrible.”

Bishop Colton was speaking at a ceremony in St Mary’s Church, Dunmanway, held to honour Sam Maguire after whom whom the All-Ireland senior football championship trophy is named.

A member of the Church of Ireland and born in the townland of Mallabraca near Dunmanway in March 1877, Maguire is buried at St Mary’s.

While in London in the late 19th and early 20th century he was heavily involved in the GAA. He returned to Ireland and was on the losing side in the Civil War.

At the age of 49, and in great poverty, he died of TB in 1927. The Sam Maguire Cup, modelled on the Ardagh Chalice, was organised by friends who, in 1928, presented it to the GAA in his honour.

Last year, following centenary celebrations of the 1916 Rising, parishioners at St Mary’s decided to commemorate him in a project involving eight bells, each with a theme which tells his story and that of Dunmanway.

Bishop Colton described the project, partly funded by the GAA, as a model from the heart of west Cork of how he hopes the coming centenary years of commemoration will be observed.

Speaking in St Mary’s over the weekend at a ceremony attended by GAA president Aogán Ó Fearghaíl and retired Catholic Bishop of Cork John Buckley, Bishop Colton said “there is an understandable reluctance to name anything in our past as sectarian or undesirable, but we are not well served by pretence either.”

His own great-grandfather came to Ireland as an English soldier, he said, and was “on the opposite side to Sam (Maguire) in events as they unfolded. After Independence, the family stayed and made this country home as Irish men and women.”

The coming centenary years called “for careful thought and even more careful and sensitive commemoration. This country has to be cautious about how it goes about commemorating events of 100 years ago. Memories are still raw,” he added.