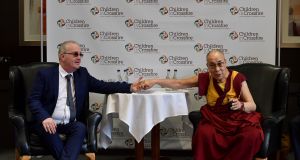 The Dalai Lama has expressed his sorrow at “fighting and killing in the name of different religions”, singling out Yemen and Myanmar as two global priorities for peacemakers.

As fellow Buddhist Aung San Suu Kyi comes under increased pressure for her silence over attacks on the Rohingya ethnic minority in her country, the Tibetan spiritual leader said “there is a lot of killing” in the world.

“It is very sad that weapons are still being sold, and people still consider force as important in solving problems,” he told an audience in Derry.

“I see these things and I cannot do anything about them, but I feel so bad because these are human beings.”

Over the weekend, the Dalai Lama spoke for the first time about the crisis in Myanmar, telling the Burmese involved in attacks on the ethnic Muslim minority to “remember Buddha”.

Speaking on Monday in Derry, which he was visiting to mark the 20th anniversary of the founding of the charity Children in Crossfire, he said that his wish was for “a more peaceful world”, and that every individual had a part to play in achieving this.

“It is extremely sad, it is untenable, that there is fighting and killing in the name of different religions.

“I think eventually this should be a nuclear-free world and a demilitarised world,” he continued.

“It will not be achieved in my lifetime but it is our duty to try and achieve a demilitarised world.”

The Dalai Lama also said the devastation of Hurricane Irma has taught Donald Trump a lesson.

He said the US president had failed to consider ecology important or relevant, but that natural disasters such as flooding and forest fires had shown otherwise.

“America is considered the leading nation of the free world, and it should take global responsibility.

“America is part of the world, it cannot be concerned with only America first, and if America is isolated from the rest of the world it will suffer.”

The Dalai Lama has long followed the peace process in Northern Ireland, based on his friendship with the founder of Children in Crossfire, Richard Moore.

Actress and human rights campaigner Joanna Lumley, who is another supporter of the charity, also spoke at the event, saying people should not allow border controls to return in Northern Ireland.

“We – and that means all of us here – should not allow that border to be returned,” she said.

Mr Moore was blinded by a rubber bullet fired by a British soldier in Derry’s Bogside when he was ten years old, and went on to found the charity in order to alleviate the suffering of children worldwide in the same way that he had been helped as a child.

“Each country belongs to its people, and the future of Northern Ireland is entirely dependent on its people,” the Dalai Lama said.

“People should think, not involve themselves in too much emotion, look at it more realistically, not have too much negative.

“I think the basic human nature is compassion. Anger isolates us from others, compassion brings us together.

“We need friends. Friendship develops on the basis of trust, and trust can come when you show your sincerity, and human compassion.”

Taking Mr Moore’s hand, the Dalai Lama spoke of his respect for his friend, and the value he placed on their friendship.

“This is a young boy who was hit by a rubber bullet. His eyesight was lost, but he had no anger. He is my hero. I very much admire and appreciate his work.

“To see him now helping thousands of other children, that is compassion with action.”

Children in Crossfire helps children worldwide who are facing the consequences of injustice and poverty.

“My dream would be that someday we don’t need a Children in Crossfire anymore,” said Mr Moore, “because every child would have the same opportunities I had.

“When I lost my sight as a ten-year-old boy many would have said my future was bleak, but the compassion and concern of others meant I was given a chance.

“That was my motivation in setting up Children in Crossfire, and with the help of people like His Holiness we will continue to alleviate the suffering of children.

“You are a beacon of light in a world full of controversy, and the lifeboat I cling to through the challenges of this world.”