Tory islanders to vote in bid to resolve ferry row 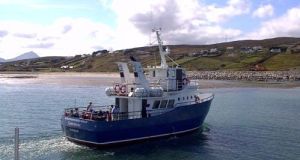 Representatives for the islanders have threatened to leave the island unless the Government provides a suitable ferry for the 15km sea crossing between Tory and Machaire Rabhartaigh.

Tory islanders have been asked to vote this weekend on a compromise which aims to resolve the row over transport links with the Donegal mainland.

Representatives for the 150-strong offshore community have threatened to leave the island unless the Government provides a suitable ferry for the 15km sea crossing between Tory and Machaire Rabhartaigh.

A report by mediator Pól Ó Gallchóir, which was presented to islanders at a meeting on Friday night, proposes that a small fast ferry will be provided in tandem with the vessel, MV Queen of Aran, which has been awarded the State contract from April 1st.

It also proposes that a winter helicopter service to and from the island be extended to run between September and April, instead of November 1st to March 30th, among several other recommendations.

At a protest in February outside the Dáil, a delegation of islanders warned of a repeat of a 1980s exodus, when 50 people left the island

Mr Ó Gallchóir, chairman of Foras an Gaeilge and former chief executive of TG4, was appointed independent mediator to resolve a dispute which arose after the new contract for the State-subsidised passenger ferry service for islanders was awarded to a company with a 40-year-old vessel.

Islanders said it was too old, and not up to standard for the crossing, and Tory island co-op/Comharchumann Thoraí manager Marjorie Uí Cearbhaill pointed out that the current contract holder, which expires on April 1st, 2018, used a vessel that was purpose built 25 years ago.

The islanders said they had been promised a new purpose-built vessel – which has been included in the Government’s Project 2040 plan.

At a protest in February outside the Dáil, a delegation of islanders warned of a repeat of a 1980s exodus, when 50 people left the island.

The Department of Culture, Heritage and the Gaeltacht said it had run an open tender competition through public procurement rules, and had awarded the service to the company Réalt na Maidne, with the MV Queen of Aran.

The report by Mr O Gallchóir, which was also presented to Minister of State for the Islands Joe McHugh, recommends that a fast ferry carrying 12 passengers could run twice daily, seven days a week, weather permitting, to and from Machaire Rabhartaigh with a journey time of 30 minutes.

This would be in addition to the MV Queen of Aran service, and would initially be provided for with a short-term contract organised by the island co-op, while the department initiated its formal public procurement.

The report also recommends increasing cargo runs from 26 weeks to 40 weeks per year, and extending the helicopter service by at least two months over the winter.

It recommends that the department review how it handles island transport tenders, given the fact that the Aran islands have also experienced difficulties with this. It recommends reviewing the role of Gaeltacht island co-ops.

Speaking before the meeting, King of Tory island Patsy Dan Rodgers said he had not seen the full contents of the report, but said he “hoped and prayed a catastrophe will be averted”.

“We need a boat that can take thousands of visitors in here during the summer who won’t get sick on the way,” Mr Rodgers said.

Mr McHugh said he welcomed the report and was “very grateful for the time and dedication Mr Ó Gallchóir has given to his role in the past week”.

“I would also wish to thank the islanders and Comharchumann Thoraí for their engagement,” Mr McHugh said, and expressed the hope that “the last week has provided the necessary groundwork for a resolution to the issues raised by the islanders and that we can move forward in the best interests of everyone involved”.