Vatican photograph from 2007 captures church past and questions its future 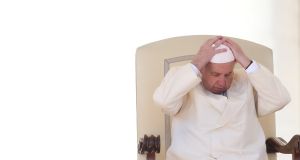 Pope Francis: seen by many as separate from the institution he leads, and which he himself struggles to reform. Photograph: Tony Gentile/Reuters

It is the story of a photograph: four cardinals, all Irish, and one president, Mary McAleese. The occasion was the elevation in 2007 of the then primate of All Ireland Archbishop Seán Brady to the College of Cardinals.

The location was the Irish College in Rome. Cardinal Desmond Connell and Cardinal Cahal Daly stand to McAleese’s right. Standing to her left, Cardinal Seán Brady and Cardinal Keith O’Brien.

The latter was born on March 17th, 1938, in Ballycastle, Co Antrim. His family moved to Scotland while he was still young, settling in Edinburgh. His death last Monday, aged 80 brought back memories of the photograph.

However, it raised thoughts, too, about the damage caused to the Catholic Church by its handling of sexual abuse allegations; but also about next August’s visit by Pope Francis.

It could be an opportunity to heal, if the right choices are made now. His personal stature is such that he is seen by many, and not just Catholics, as separate from the institution he leads, and which he himself struggles to reform.

Appropriate contrition from him to all the Irish people – abuse victims, their families, perhaps even the Irish Catholic Church itself where appropriate – could herald a new beginning. For there is much contrition to be done.

Two years after the photograph was taken, in November 2009, the Murphy report, which investigated the handling of clerical child sex abuse in Dublin’s Catholic archdiocese, laid into the reputation of the late Cardinal Connell.

It found that Connell and his three predecessors as archbishops of Dublin had responded to clerical child sexual abuse over a 30-year period in the diocese with “denial, arrogance and cover-up”.

None of the four archbishops had reported their knowledge of clerical child abuse to gardaí “throughout the 1960s, 1970s or 1980s”. Church authorities had used “mental reservation” to allow them mislead people without being guilty, in the church’s eyes, of lying.

Murphy concluded that over the period within its remit (1975 to 2004) “the welfare of children, which should have been the first priority, was not even a factor to be considered in the early stages” in Dublin. Instead, everything was about the avoidance of scandal.

In January 2017, the Historical Abuse Inquiry Report in Belfast found that, in 1990, while bishop of Down and Connor, Cardinal Cahal Daly had failed to tell Bishop McKiernan of Kilmore that Fr Brendan Smyth, then living in his diocese, had faced sexual abuse allegations.

Proper communication could have created some prospect that more vigorous steps could have been taken to ensure that Smyth was unable to travel across the island of Ireland, both North and South, and elsewhere, and so unable to abuse a large number of children, it stated.

Over 40 years, Smyth abused an estimated 140 children. In 1994 he was jailed in Belfast for abusing three children in one family there. A delay in processing his extradition to Belfast for that trial led to the collapse of the Republic’s government in November 1994. In 1997, Smyth was jailed for 12 years in Dublin on further child abuse charges. He died a month into his sentence.

Giving evidence to the inquiry, he said some of the intimate questions he had asked the boy now made him cringe in horror

To McAleese’s immediate right in the 2007 Irish College photograph is former Catholic primate of all Ireland Cardinal Seán Brady, who retired as archbishop of Armagh in 2014.

The 2017 Historical Abuse Inquiry Report found that Brady had “effectively silenced” 14-year-old Brendan Boland in the 1970s after he had interviewed Boland following allegations the latter had made about abuse at the hands of Smyth.

Brady believed Boland. Giving evidence to the inquiry, he said some of the intimate questions he had asked the boy now made him cringe in horror. Later, he interviewed another Smyth victim, stopping him “from telling anyone”, even though he believed him, too.

To McAleese’s further left in that photograph is the late Cardinal Keith O’Brien. In 2012, O’Brien blocked plans by the Catholic Church in Scotland to carry out independent analysis of statistics about clerical child sexual abuse from 1952 to 2012.

Publicly, a virulent opponent of civil partnerships and same-sex marriage, he was indicted by the Catholic Church in February 2013, after initial denial, of inappropriate and predatory sexual behaviour with seminarians in the 1980s.

He was exiled from Scotland and died in Newcastle after a fall, last Monday. He will be buried there on April 5th. By request of the Vatican, the President of the Catholic Bishops’ Conference of England and Wales, Cardinal Vincent Nicols, will be celebrant and deliver the homily.

As is customary, Pope Francis has sent a message of condolence to the Archdiocese of Edinburgh and St Andrews, to Cardinal O’Brien’s family and all who mourn him.

Ten years before the photograph was taken, McAleese was publicly criticised by Cardinal Connell for taking Communion in Dublin’s Church of Ireland Christ Church Cathedral. He said it was “a sham” for a Catholic to do so.

That same year, McAleese was confronted by then cardinal archbishop of Boston, and Irish American, Bernard Law, who told her he was “sorry for Catholic Ireland to have you as president”. Taken aback, she replied that she was “the President of Ireland and not just of Catholic Ireland”.

In 2002, Cardinal Law resigned over his handling of clerical child sex abuse allegations. His was appointed archpriest of one of the major basilicas in Rome, St Mary Major, with his own apartment, a chauffeur- driven car, an estimated income of $10,000 a month and the right to say one of the nine Masses that follows the death of a pope.

He did so in 2005 on the death of Pope John Paul II, to the astonishment of the faithful in Boston.

This month, the former president was barred from taking part in a discussion in the Vatican to mark International Women’s Day by another Irish-born cardinal, Cardinal Kevin Farrell. And people wonder why she is angry with the institutional Catholic Church?

In a February 2010 letter to Irish Catholics after the publication of the Ryan and Murphy reports in 2009, Pope Benedict XVI said the cover-up of clerical child sex abuse in Ireland had “obscured the Gospel to a degree that not even centuries of persecution” during the Penal Laws had matched.

But his letter ignored Rome’s role in any of this. Meeting in Sligo in 1997 with the Irish bishops, Cardinal Castrillion Hoyos, prefect of the Congregation for Clergy (until 2006), insisted it was Vatican policy to defend the rights of an accused priest above all and so allegations of clerical child sex abuse should not be reported to gardaí or civil authorities in Ireland. Desmond Connell thumped a table in frustration.

The Vatican also refused to support child protection documents published by the Irish bishops in 1996, 2001, and 2005, meaning they had no authority in canon law, so favouring the abuser priest. The Vatican did not even acknowledge correspondence from the Murphy commission.

In February 2007, the Murphy commission tried writing to the then papal nuncio to Ireland requesting he forward “all documents in his possession relevant to the commission”. He did not reply.

In Ferryhouse in Tipperary, a young boy was held back from attending the papal Mass in Limerick as punishment for absconding. Then, he was raped by the Brother left in charge

In early 2009 it wrote to the then new nuncio to Ireland enclosing a draft of its report for comment. He did not reply.

The nunciature in Dublin has been the conduit to Rome for clerical child sexual abuse reports sent there following a request in 2001 that such be submitted from each diocese in Ireland, by then prefect of the Congregation for the Doctrine of the Faith Cardinal Joseph Ratzinger, later Pope Benedict XVI.

The announcement of Pope Francis’s visit this week brought back reminders of darker days during Pope John Paul’s papal visit in 1979, when Fr Patrick McCabe abused a boy at Dublin’s Pro Cathedral as that visit was under way, as emerged during the priest’s trial in March 2013.

In Ferryhouse in Tipperary, a young boy was held back from attending the papal Mass in Limerick as punishment for absconding. Then, he was raped by the Brother left in charge. The abuser was later sentenced to nine years, three suspended, 20 years after the event.

Then, of course, there was Pope John Paul’s warm-up act at Galway; the then Bishop of Galway Eamon Casey and well-known Dublin media priest Fr Michael Cleary, both of whom already had children, as would emerge later.

A lot has emerged in Ireland since that last papal visit, a lot about the unnecessary suffering inflicted on innocents by a powerful institution intent on protecting itself at all costs, human or material. More continues to emerge, as we now see in Dromore diocese

Despite the horrors revealed in recent decades, the Catholic Church in the main remains a force for good in Ireland.

Explaining why she remained a Catholic in Rome earlier this month, despite everything, Mary McAleese said she did so because she chose to be “part of an institution that has no equal on the planet in terms of its outreach to the poor, the dispossessed, to the marginalised, part of an institution [that can be] the hands of God’s work in the world.

“No NGO does what that Catholic Church does through ordinary people. They’re the people who inspire me, it’s their work that drives me on and gives me hope for the future,” she said. She spoke for many Irish Catholics.