Up to 20 families face homelessness over planning dispute 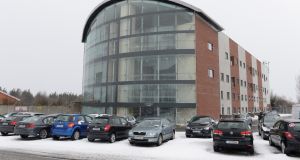 Larkfield House, Dublin. Housing assistance has been suspended to tenants as the council awaits a decision from An Bord Pleanála as to whether the building complies with planning. Photograph: Dara Mac Dónaill/The Irish Times

Up to 20 families in an apartment block in Clondalkin, Dublin face homelessness in less than a month as their housing support payments have been stopped amid planning concerns.

South Dublin County Council has confirmed it has suspended paying Housing Assistance Payment (Hap) to tenants at Larkfield House, Coldcut Road, as it awaits a decision from An Bord Pleanála as to whether they comply with planning. This follows an inspection of the building earlier this month.

Permission was initially granted by the council for 27 apartments at the site of the former Liffey Valley Fitness premises, in September 2016. It appears, however, that more than 45 apartments were built.

In May 2017 developer Cavvies Ltd applied for permission for “a total of 48 residential units [40 two-bed apartments, four one-bedroom apartments and four studios]. . . with 52 car parking spaces” at the site. The council refused permission in August 2017.

Cavvies Ltd appealed this to An Bord Pleanála on August 3rd, 2017. Though a decision was due on December 6th, it has been delayed due a backlog. A decision is expected later this month.

Among the affected tenants are about 20 families who were being supported by South Dublin County Council with the Hap, while others had moved in who had been approved for Hap.

However, the council has now suspended payments to, and ceased taking applications from, households in the block. A number of other, formerly homeless, households placed there by Dublin City Council have been told their payments will continue “until tenancy end”.

‘I am very worried’

None of the tenants who spoke to The Irish Times wished to be identified. Among them is ‘Peter’, a single father of two young children who moved in on February 1st, the apartment’s first let.

“I was very relieved when the agent said they were happy to take Hap. I have lived in Clondalkin all my life, my children’s school is a five-minute walk away and this is somewhere I could see staying long-term.” He is working, and borrowed €3,400 for two months’ rent. Already approved for Hap, he submitted his forms and lease to the council.

“Then a couple of weeks in I got a call from the Hap section saying they weren’t going to process my application. They said, ‘there’s a planning issue with that building.’ I asked: ‘What am I going to do?’ and she said, ‘I honestly don’t know what to tell you’.”

He knocked on neighbours’ doors to find “about 20 of us are in the same situation. We all of us have kids. I kind of brought it up with my daughter, she’s eight, about how would she feel if we moved again and she started crying.”

Like him, ‘Sarah’, a young mother of one girl, has not been able to pay rent as her Hap application was not processed. On March 5th, she received notice that she had “failed to pay rent . . . As of today you owe €1,700 . . . If you fail to pay these arrears within 14 days I am entitled to terminate your tenancy”.

“So I am due to get my 28 days’ notice to quit on Monday, 19th. I am very worried. I really don’t want to put my daughter through going homeless.”

Eoin Ó Broin, local TD and Sinn Féin spokesman on housing, described the planning breaches as “staggering” and called on the local authority to continue paying the tenants’ Hap as an emergency measure “to avoid these families becoming homeless, until the situation is clarified by An Bord Pleanála”.

A spokesman for South Dublin County Council said: “The decision of An Bord Pleanála is awaited in this case. No Hap is currently being paid until the matter is resolved and depending on the board’s decision.”

Dublin City Council said: “The homeless section are not taking Hap applications from tenants who wish to rent in Larkfield House. . . Those we accepted prior to these concerns being raised will be processed as normal with rent being paid through the national payments system subsequently. These payments will continue until tenancy end. There are currently 19 tenancies set up through the (Homeless) Hap Scheme in this development.”

Jackie Cosgrave, co-director of Cavvies Ltd, did not respond to email or phone contact from The Irish Times.