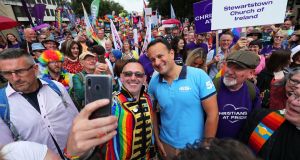 Taoiseach Leo Varadkar poses for a photo at the start of the Belfast Pride parade. Photograph: Niall Carson/PA Wire 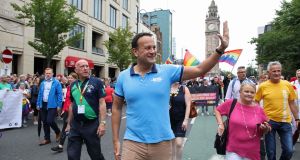 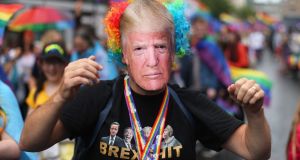 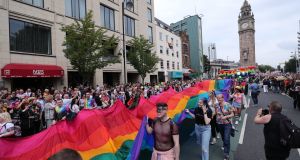 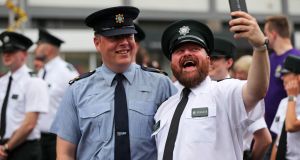 A member of the PSNI and Garda take a selfie together at the start of the Belfast Pride parade. Photograph: Niall Carson/PA Wire

Taoiseach Leo Varadkar has taken part in the annual Belfast Pride parade for the first time.

The ‘Rights Now’ themed event, which attracted tens of thousands of participants and spectators, plus 17 religious protesters, to the city on Saturday, is the centre piece of the annual 10 day LGBT festival.

“I am not here to be party political in any way, I am just here to celebrate Belfast and Northern Ireland at its best,” Mr Varadkar told The Irish Times.

He later tweeted: “Biggest march in Northern Ireland is not orange or green, it’s rainbow coloured. This is NI at its best. Best of Britishness and Irishness.”

He was accompanied on the route by Lord Robert Hayward, the Tory peer who helped bring same sex marriage legislation through Westminster earlier this year.

Same sex marriage is due to be introduced to Northern Ireland in October.

Lord Hayward said he was “absolutely honoured” to be walking in Belfast Pride with Mr Varadkar.

“I am looking forward to being able to celebrate the first marriages under the legislation and the Taoiseach has asked me for an update so I have given him a briefing on the legislation,” he said.

Among others taking part in the parade for the first time were Ulster Rugby, Antrim GAA and BBC Northern Ireland’s Pride Network.

Sinn Féin Lord Mayor John Finucane had an early start on Saturday, raising an original Gilbert Baker rainbow flag from the flagpole on the roof of City Hall, after this was voted for by councillors.

“I wanted to be there this morning when the flag went up because I think it’s historic, it’s the first time it has flown and I would guarantee it won’t be the last time.

“It sends a powerful message to a community that has been isolated and demonised for so many years in this city, and shows Belfast is vibrant and inclusive.”

Aíne Maguire (25) from west Belfast said Pride parade day was “the best day of the year”. “It’s gay Christmas,” she said. “I love this day.

“I teared up this morning seeing John Finucane putting the rainbow flag above City Hall.

“That is something when I was 13 and knew I was gay I could never have imagined seeing.

“Love is love. Today is a celebration of that.”

Her partner Rebecca Toolan (23) from north Belfast said it has been wonderful to see Belfast Pride getting bigger every yer and drawing support from all areas of life, “There has been a big tide of change over the last few years,” she said. “The people not supporting are now the odd person out.”

Debbie Gaskin (42) from Belfast via Canada was at Pride with her daughter.

“My daughter is gay and I have been bringing her since she was 15 and I love this day to bring out my inner child and use my creativity and have fun,” she said.

“When my daughter was born all that mattered to me was her health and happiness and now she is with the love of her life now so hopefully one day they can get married.”

Ciaran McEvoy (30) from Craigavon and his partner Dale were on babysitting duty at Pride with their friends two children. They are engaged to be married.“I am glad Westminster are introducing marriage but it shouldn’t have come to that,” Ciaran said. “It should have been done a long time ago.”

Stevie McGinn (27) from west Belfast said he was at the event “to continue the fight for queer liberation and celebrate how far we have come in 50 years”.

“Queer visibility is important to show our young people and those who haven’t got to the stage of coming out yet that it is ok and there is a whole community to celebrate them and who they are,” he said.

“It’s also to remind people that yes, marriage equality might be coming soon but there are so many more issues affecting this community around trans people, access to IVF and all different things so the fight is not over.”

Northern Ireland remains the only part of the UK where gay marriage is illegal.

That could change however, after landmark legislation was passed by the UK Parliament which will allow same-sex marriage in the region if devolution is not restored by October 21st.

The changes will not come into effect if Northern Ireland’s two main parties, Sinn Féin and the DUP, can reach an agreement to form a new Executive before the deadline.

Meanwhile, the head of BBC Northern Ireland addressed the “confusion” around staff members attending Belfast Pride saying the broadcaster is not participating corporately.

The BBC has faced questions over impartiality – given that same-sex marriage is a contentious political issue in the region – since announcing staff in the organisation’s BBC Pride group would be attending the event.

A memo to workers issued last week said staff would be participating in the annual Pride parade wearing BBC-branded T-shirts.

BBC NI director Peter Johnston acknowledged there had been “confusion” about the “terms and basis for BBC staff involvement in the Belfast Pride parade 2019”.

He said while members of the BBC Pride staff network – an employee-led initiative – would be taking part, BBC NI as a corporate body would not.

“We know that there are legislative issues specific to Northern Ireland in relation to same-sex marriage,” he said.

“These raise important considerations for the BBC in the context of its editorial guidelines, including the requirement to maintain due impartiality within our output.

“None of this means that members of the BBC Pride network cannot be involved in Pride festivities in Belfast, but it does require BBC Northern Ireland to avoid creating the impression that it has a position on matters of political contention or controversy.

“The BBC’s editorial guidelines provide clear advice in this regard. It is on this basis that BBC NI will not be involved corporately in the Belfast Pride parade and that individual programme brands will not be represented.”

The ITV-owned organisation participated in the event for the first time in 2017, with several well-known UTV broadcasters taking part.

A spokeswoman for UTV said the company was proud to be involved. Additional reporting PA

1 Close businesses selling alcohol to on-street drinkers, restaurant group says
2 Ryan confirms travel ‘green list’ will come in after July 20th
3 Ireland is ‘weeks away’ from a second wave of coronavirus, doctor claims
4 Kanye West says he will run for US president in 2020
5 FF MEP apologises for flying to Dublin for election of Taoiseach despite Covid-19 rules
Real news has value SUBSCRIBE